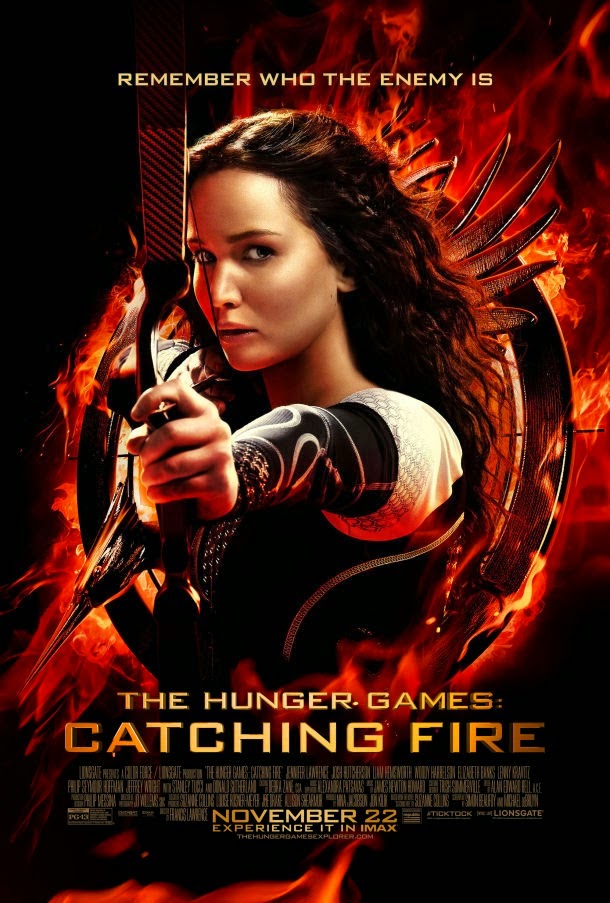 After months and months of waiting, I was finally able to watch Catching Fire on the big screen this morning. (I was so excited, I even dressed up as Katniss Everdeen for the movie!!!)

Catching Fire is the second installment in The Hunger Games series. The story picks up right after our heroes Katniss Everdeen and Peeta Mellark return home as winners of the 74th Games. But their victory, not to mention their fake love story, has sparked an uprising in the districts. Things are difficult for Katniss as it is, what with the confusing Gale or Peeta debate raging in her head, but little does she know that President Snow has a plan to finish her, and quell the rebellion, once and for all. Will he succeed? Will she survive? Will her spark trigger an inferno?

It was Finnicking awesome! Truly Mellarkable!!! :O
The movie was supposed to be two and a half hours long, but time just flew by. I wasn't bored for even a second, and I was on the edge of my seat the whole time.

We bookworms couldn't have asked for a better on-screen depiction of the novel. The direction, the dialogues, the cinematography, the special effects... they all were top-notch. The entire movie felt so... real. Forget The Hunger Games - you cannot compare the first one to this sequel. The director, Francis Lawrence, has done such an amazing job that even though a few scenes from the book were cut, I didn't realise it until I was out of the theatre.

The music is eerie and beautiful, fierce and emotional, all at the same time. The Capitol Anthem (Horn of Plenty) which was previously heard in the first film, has been used again this time, and that makes the movie even better!

Jennifer Lawrence has outdone herself as Katniss Everdeen. I truly think no one else could have personified the girl on fire as well as she has. Josh Hutcherson is great as Peeta Mellark, and his romance with Katniss is so beautiful that you will find yourself going 'Awww' again and again.
Jena Malone, who played Johanna Mason, was probably my favourite in the movie (after J-Law, of course). She was the perfect Johanna - sassy, fierce, funny and brave - and at times, she was even better than the one in the books!

Sam Claflin as Finnick Odair and Liam Hemsworth as Gale Hawthorne didn't really match up to the standards of the other actors, but they were still believable. Sam Claflin was really good in some scenes, but I still don't see him as the perfect Finnick.
As for Liam Hemsworth and Gale... ehh. Not a fan of the actor or the character.

Every scene in the movie was awesome, but a few come to my mind now - District 11 during the Victory Tour (I'd be lying if I said I didn't get emotional. To be honest, I was bawling like a baby), the interviews with Caesar Flickerman (the scenes were funny and intense at the same time), Katniss' wedding dress (the effects were simply astounding), the entire sequence with the poisonous fog in the arena (I was scared for them, even though I already knew what was going to happen), the romantic beach scene between our star-crossed lovers (why aren't all boys like Peeta Mellark?), and finally... the climax, and the ending. So emotional. So shocking. So perfect.

I was shaking even after the movie ended. I was in shock, to be honest.

I've never seen a movie based on a book that was this good. Catching Fire, the movie, was just as good as the book. All those words, all those chapters just came to life on the big screen in a way that I'd never imagined.

I'm definitely going to watch this movie again when I get the chance. If I can rewatch the first one twenty times, even though I didn't like it too much, this one I can watch a million more times.

If you've already seen Catching Fire, tell me how much you loved it in the comments below, and if you haven't seen it yet... what are you waiting for?!

Don't forget to +1 this post and follow my blog if you like reading what I have to say.
I'll see you guys next time... and may the odds be ever in your favour! ^_^