You might remember me fangirling over 'Fangirl' in this review. So naturally, I wanted to pick up more books written by Rainbow Rowell so I could fall in love with some more fictional characters.

'Attachments' is Rowell's first novel. Unlike 'Fangirl', which is a New Adult (college) story, this one is strictly about adults and their lives. 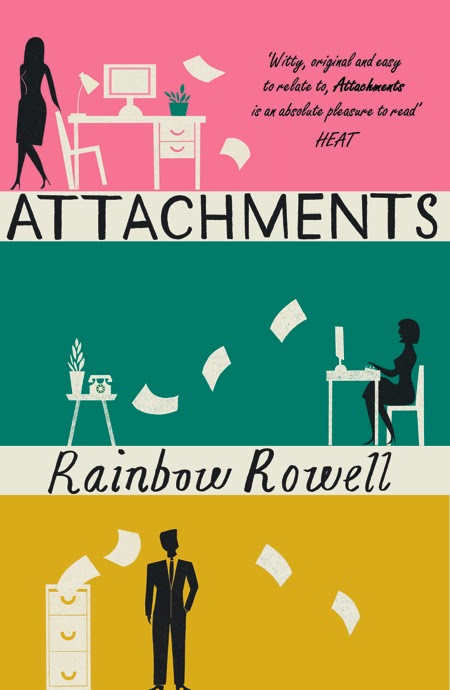 Here's the summary, courtesy of www.goodreads.com:

Beth Fremont and Jennifer Scribner-Snyder know that somebody is monitoring their work e-mail. (Everybody in the newsroom knows. It's company policy.) But they can't quite bring themselves to take it seriously. They go on sending each other endless and endlessly hilarious e-mails, discussing every aspect of their personal lives.

Meanwhile, Lincoln O'Neill can't believe this is his job now- reading other people's e-mail. When he applied to be "internet security officer," he pictured himself building firewalls and crushing hackers - not writing up a report every time a sports reporter forwards a dirty joke.
When Lincoln comes across Beth's and Jennifer's messages, he knows he should turn them in. But he can't help being entertained - and captivated - by their stories.
By the time Lincoln realizes he's falling for Beth, it's way too late to introduce himself.

The moment I finished reading said summary online, I just had to add it to my To-Read list. I know most people will find the whole idea of the hero reading the girl's emails creepy, but... it really pulled me in. I really wanted to see how things would turn out for them when they actually came face-to-face with each other (if they did).

Now, onto the review.

Set in 1999, this story is told mainly through Lincoln's point of view, although here and there we are also given access to Beth and Jennifer's email conversations.
I loved reading their emails so much that I really can't blame Lincoln for doing it! Their emails are raw, thought-provoking and extremely funny, so much that I started to hope for a chapter from their points of view, too.

But the Lincoln-chapters are great as well. I'll admit that the beginning is quite slow. It didn't attract me as much as 'Fangirl' did, but once I got involved in the girls' lives, and Lincoln's too, I really started to enjoy this book!
As usual, Rowell's writing is crisp and witty. There are no actual jokes being cracked, but you'll still laugh out loud every now and then.

Truthfully, I didn't find Lincoln's character that believable. He's said to be a 'cute guy' and has got multiple graduate degrees because he loves school, yet he has been single for many years, spends his weekends playing Dungeons & Dragons and still lives with his mother! I'm sure such characters do exist somewhere in the real world, too, but... why does it take him so long to get over his first love and move on? For a man that mature, it doesn't make any sense.

Beth and Jennifer's friendship is amazing. They are work-besties and they share every aspect of their lives with each other. While Beth is confused about her boyfriend's nonchalant behaviour, Jennifer is torn between her husband's want of kids and her own desire to stay, well, not-pregnant. Lincoln finds himself thinking about their lives, especially about Beth's, and is as curious about the next email as I was while reading.

And once Beth starts talking about the 'Cute Guy' in their office, and Lincoln finds out that she's talking about him, hilarity ensues. I couldn't wait for them to have an actual face-to-face chat after that!

Oh, here are some dialogues and scenes that I loved:

"Why should every pregnant woman be expected to read the same book? Or any book? Being pregnant isn't that complicated. What to Expect When You're Expecting shouldn't be a book. It should be a Post-it: 'Take your vitamins. Don't drink vodka. Get used to empire waistlines.”

Ergo. Therefore. Thus… He technically, ethically, had no reason to keep reading their e-mail. Lincoln had told himself all along that it was okay to do this job (that it was okay to be a professional snoop and a lurker) as long as there was nothing voyeuristic about it. As long as he didn't enjoy the snooping and lurking.

That night, Lincoln got an email from Dave saying that Saturday's D&D game was off. One of their kids had rotavirus, which Lincoln had never even heard of. It sounded awful. He pictured a virus with rotating blades and an engine.

One reason why I applaud Rainbow Rowell's commendable writing skills - she has managed to write a chicklit romance novel entirely from the perspective of a man, without coming across as lewd, perverted or weird, as such novels often do.

But somehow, I felt the ending was a little rushed. I liked the way it ended, but for two people who have never really met each other before, Lincoln and Beth were being too romantic. It just didn't seem realistic, especially not for Beth, who only has a physical crush on him.
As I've mentioned previously, this is Rowell's first novel, and I could tell by the writing, story and characters that it was.

Even though I definitely enjoyed reading this book, and will probably read it again soon, the slow beginning and too-romantic ending put me off a little. It was no 'Fangirl', that's for sure, but the charming Rowell has still made me proud. :)

Read this book and tell me what you thought of it in the comments.