'The Fault in Our Stars' by John Green: A Book Review 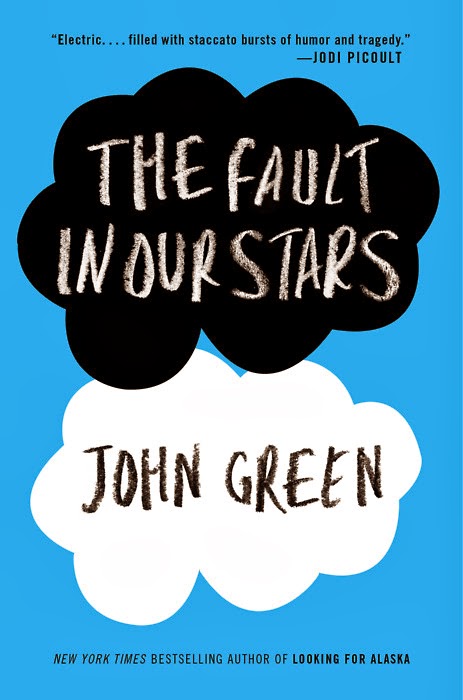 Welcome to yet another book review!

Let me be honest: this is my second time reading this book. It didn't make much of an impression on me the first time, but the movie is coming out this summer, so I thought I might as well read it again.
This time, I definitely liked it better.

The Fault in Our Stars (TFIOS) is a cancer book. But more than that, it's a story about love. If you took away the cancer part of the story, there'd still be enough going on to fill up the pages.
Without further ado, here is the plot summary, courtesy of www.goodreads.com:

"Despite the tumor-shrinking medical miracle that has bought her a few years, Hazel has never been anything but terminal, her final chapter inscribed upon diagnosis. But when a gorgeous plot twist named Augustus Waters suddenly appears at Cancer Kid Support Group, Hazel's story is about to be completely rewritten."

(Wow. That was possibly the shortest summary I've ever seen.)

Hazel Grace Lancaster is your average teenage nerd girl. She's not the best-looking girl out there, but she's very smart; she doesn't have a lot of friends, just some people that she loves with all her heart; and she's very close to her family.
Oh, and did I mention that she has cancer?

I liked the way Hazel thinks, but her thoughts definitely don't seem very teenage-like. Enter Augustus Waters, the soon-to-be love of her life (with a wooden leg), who also doesn't talk like a teenager. Now, I wasn't expecting them to say, "like, whatever!" after every word, but I doubt two people that young can be so philosophical - whether they're dying or not.

That being said, I loved reading their conversations, because they're so witty and thought-provoking. The characters are great. I could definitely relate to Hazel (minus the cancer part), and Gus is nice, but he's too... 'perfect' to be real. Good-looking, intelligent, muscular, funny, and sweet, all in one? I doubt that.
He is shown to be immensely arrogant, though, but I still don't find him realistic enough.

Then there's Isaac, who has to undergo surgery to remove his cancer, and ends up blind. Overly sensitive and sometimes a little annoying, he is nevertheless a true friend who almost made me cry at one point towards the end of the book.

Peter Van Houten... he's the author of An Imperial Affliction, the cancer book that Hazel feels is her Bible. I didn't like his character one bit, mostly because of what he says about fictional characters - that they cannot exist beyond the scope of the novel. Once the story ends, they cease to exist (if they ever did).

Well, being a lover of fanfiction and a writer myself, I have to disagree with him. Fictional characters are alive not because of the words in the book, but because of the lesson they teach us. They will impact our lives and we can go on learning from them even after the book ends.

John Green is a terrific writer. He can use words as a weapon to make you laugh or cry at the drop of a hat. Let's read some of my favourite lines from the book, shall we?

“Sometimes, you read a book and it fills you with this weird evangelical zeal, and you become convinced that the shattered world will never be put back together unless and until all living humans read the book.”
(This is how I feel about Harry Potter, The Hunger Games, Divergent, Matthew Quick... but not TFIOS.)

"May I see you again?" he asked. There was an endearing nervousness in his voice.
I smiled. "Sure."
"Tomorrow?" he asked.
"Patience, grasshopper," I counseled. "You don't want to seem overeager.
"Right, that's why I said tomorrow," he said. "I want to see you again tonight. But I'm willing to wait all night and much of tomorrow." I rolled my eyes. "I'm serious," he said.
"You don't even know me," I said. I grabbed the book from the center console. "How about I call you when I finish this?"
"But you don't even have my phone number," he said.
"I strongly suspect you wrote it in this book."
He broke out into that goofy smile. "And you say we don't know each other.”

"You don't get to choose if you get hurt in this world...but you do have some say in who hurts you. I like my choices.”

“What a slut time is. She screws everybody.”

Hazel and Augustus talk again and again about the way cancer victims are perceived. They hate the sympathy and pity they receive, and they hate the assumptions that other people make about them. But then again, these two characters go on accepting Cancer Perks and contradicting themselves again and again.
Their love story, though sweet and beautiful, is perhaps meant only to blackmail us into crying about the sorrows of their lives.

I didn't cry at any point in the book - I almost did, but I didn't, in the end - but that's only because these characters were too perfect for me to really care about. I usually cry about everything (mention Mockingjay or The Deathly Hallows and I'll probably burst into tears) but this book didn't get that reaction from me, even though it desperately tried to pull me in.

I'm going to go with 3.5 stars out of 5 for this one.
The writing is excellent, the characters are witty, but they are also unreal and there's too much emotional blackmail for me to handle.
But I still think this book is worth one read, at least, because the movie is coming out soon and it looks simply fantastic. Click here to see the trailer!

I haven't read any other John Green books, but I've heard that almost every story that he writes has the same, intelligent protagonists and the usual plotline. I've added his books to my To-Read list and I'll let you know what I think of his other works.

Are you a die-hard TFIOS fan? Let me know what you did and didn't like about this book in the comments below.
See you later, Geeks!