Say the word 'abortion' and a much-heated debate is guaranteed.
But author Neal Shusterman has found a solution to quell the pro-life and pro-choice arguments, once and for all. 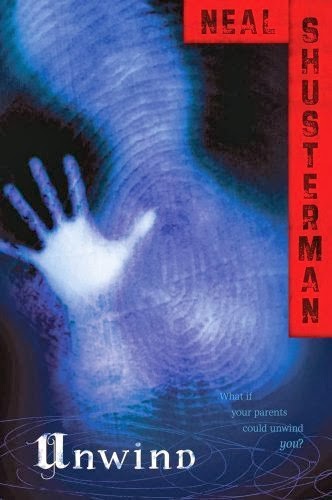 Today I'm going to be reviewing the first book in the Unwind series. This is another young adult dystopian novel, although the focus is on horror, gore and war and there's practically no romance. This book is not for the faint of heart, mind you.
Here's the plot summary, courtesy of my favourite www.goodreads.com:

"Connor, Risa, and Lev are running for their lives.
The Second Civil War was fought over reproductive rights. The chilling resolution: Life is inviolable from the moment of conception until age thirteen. Between the ages of thirteen and eighteen, however, parents can have their child "unwound," whereby all of the child's organs are transplanted into different donors, so life doesn't technically end. Connor is too difficult for his parents to control. Risa, a ward of the state is not enough to be kept alive. And Lev is a tithe, a child conceived and raised to be unwound. Together, they may have a chance to escape and to survive."

Alright, alright, I know what you're thinking: even in an eerie, dystopian world, a future like that just isn't plausible. Why would any parent want to unwind their child as 'punishment'?
Sadly, we are not given an answer to this question unless we assume that all parents turn into evil monsters in the future.

At one point in the story, Shusterman talks about the population control measures in China, and I can't help but think that he could have used this theory to validate his dystopian world! Maybe abortion is illegal, but there's a strict one-child only rule, so parents must unwind one of their children before they turn 18. That makes sense, and also shows the helplessness of the parents in such a situation.
But no, Unwinding is common practice now because of the need for organ donors. Instead of curing patients, doctors choose to replace their body parts, and all those parts need to come from someone, right?

So yes, the premise of this story is rather unbelievable.

Let's move on to the writing, the storyline and the characters. The novel is written in present tense, with a third person narrative mode from the point of view of various characters. I've never seen a book written in this way before, but it's a change that I don't mind.
There is some romance, given that it's a young adult novel, but... it felt forced. I wasn't given any insight into the character's emotions, so it felt very sudden when the romance just bubbled out of nowhere in the story!

From the moment the book started, it had me at the edge of my seat. Though unrealistic, I really wanted to know more about this world, and the book really pulled me in. To quote my dear friend Augustus Waters, while reading this book, I felt like I was on a rollercoaster that only goes up!

The middle is fast-paced, but the ending is comparatively slower... the real action only happens in the last twenty-or-so pages, but there is no cliffhanger. You all know how much I love cliffhangers, right? They give me a desperate desire to read the next one in the series. This one didn't really do that.

As for the characters... I really liked Risa and Roland. Connor was a little typical... (good-looking bad boy who's actually very sweet) and I just couldn't connect with Lev. The Admiral's character intrigued me, and I spent quite a lot of time wondering who he really is and whether he's the hero of the story or the villain. The answer isn't given to us until the very end.

The quotes and dialogues aren't out of this world or something very special, but for tradition's sake, here are some of my favourite lines:

“In a perfect world everything would be either black or white, right or wrong, and everyone would know the difference. But this isn't a perfect world. The problem is people who think it is.”

“You see, a conflict always begins with an issue--a difference of opinion, an argument. But by the time it turns into a war, the issue doesn't matter anymore, because now it's about one thing and one thing only: how much each side hates the other.”

“Most people have two emergency modes. Fight and Flight. But Connor always knew he had three. Fight, Flight, and Screw Up Royally.”

I read most of this book at night, in the darkness, so I would be lying if I said I wasn't scared. This is a dark story, and some details are quite gruesome, so be prepared for that.

Unwind isn't the greatest dystopian book of all time - but it's also not the worst. The story and characters, with some development, can definitely win me over next time. Let's hope that's what the next book in the series, UnWholly, has to offer!

I'm going to go with 3.5 stars out of 5 for this one.
Not recommended for those with a weak stomach or those looking for a story with morals and/or love stories.

If you've read the Unwind Dystology, then go ahead and leave me a comment telling me what you thought of this series. No spoilers, mind you! :)