'Find Me' by Romily Bernard: A Book Review 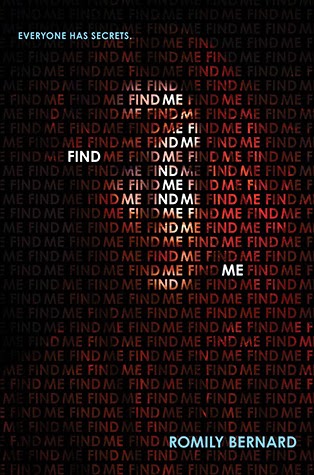 A girl is dead…
A killer’s closing in…
And two little words are the only clue…
“Find Me”.
These are the words that Wick Tate finds in Tessa Wayne’s diary. And now Tessa has been found... dead. Does someone out there really expect Wick to uncover the truth about her death?
An expert computer hacker, Wick has the skills for the job, but with the threat of her ex-con dad returning, the detective hunting him sniffing around and new foster parents to keep happy, getting involved with a murder case is the last thing she wants to do. Until her little sister, Lily, is the next target.
Foster child. Daughter of a felon. Loner hacker-girl. Wick has a bad attitude and sarcasm to spare. And now she’s going to find this killer, no matter what it takes.
Because it just got personal.

Today I'm reviewing Find Me, the first in a young adult thriller series, revolving around the life of teenager hacker Wicket 'Wick' Tate and the events that unfold after the death of an old friend.
I had a lot of expectations for this book, but sadly, it did not satisfy me.


When I first read the little blurb, I was psyched! There's nothing as exciting as murder! In books, I mean, not in real life. Add a teenage hacker into the mix and this could have been the recipe for a perfect YA murder mystery.

But... the book just fell apart.

I was hooked at the beginning. The start was great; the mystery thickened, the suspects were introduced, there was scope for a nice romance.... and then everything just fell flat around the middle.
I was actually so bored by the story (and annoyed by the romance) that I put this book aside and read other books instead.

Finally, once I cleared my head, I leapt back into Find Me. The suspense fizzled a little when I solved the mystery much before the ending. Also, the love story between Wick and what's-his-face (Griff, was it?) just didn't seem real. One minute she didn't know if she could trust him, and the next minute she was mad for him. Huh? I didn't like that boy one bit, although his nickname for her (Wicked) did make me smile a few times.

You should know that it was a little after midnight when I got to the ending. I might have figured out who the killer was, but didn't stop me from getting scared. The ending was quite intense and, thanks to the pitch-black darkness of the night, a little frightening, too.

But the beginning and ending couldn't make up for the slow middle, the blah romance, the one-dimensional characters and lack of character development. The writing didn't help much, either. It wasn't anything special.

I'm going to go with 2.5 stars out of 5 for Find Me.
If the author had saved the love story for the sequel (Remember Me, expected publication Sept 2014) and made the killer a little less obvious, this book could have been so much more....

However, I will still be reading the sequel, whose plot seems better, because I'm big on second chances. :)

Do I recommend this book? Well, if you're on a three-hour plane ride at night and bored out of your wits, then pick this one up.
But if you're looking for that special someone of Books... keep looking.

Did you like Find Me, or do you agree that it just couldn't pull you in? Let me know in the comments.
See you soon!