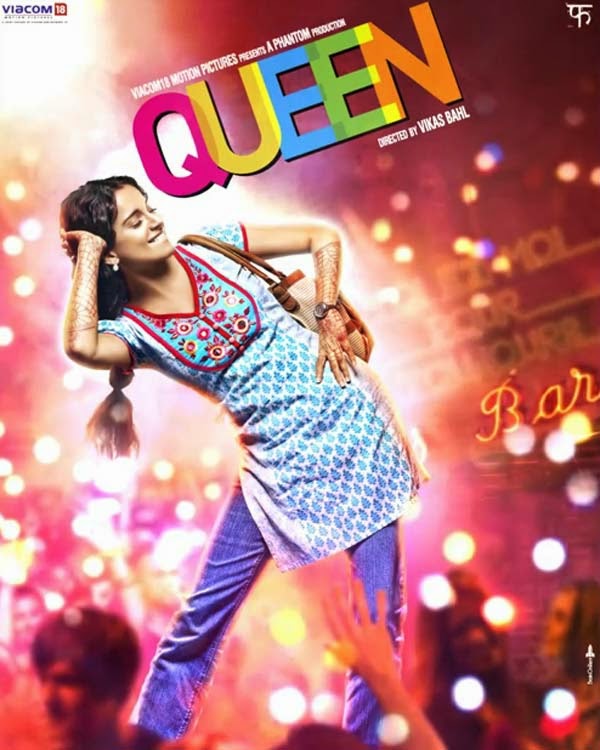 Today I'm going to talk about Queen, a movie I went to see about a week ago when I desperately needed a break from exams.
Well, before I start the review, let me just say it: Queen is such a great movie. If you haven't seen it already, go watch it now!
(Actually, finish reading this review. Then you can go.)

After being dumped by her fiancé just two days before her wedding, small-town girl Rani (Kangana Ranaut) sets out on her exotic honeymoon - alone. Hilarity ensues when she travels to Paris and Amsterdam and makes new friends, lives with three men, experiences freedom for the first time and most importantly, falls in love - with herself!


This movie... oh, there's no better way to spend two and a half hours than to watch this film. This isn't one of those big-budget corny Bollywood films that we're all sick of. No, this is a small-budget film with a heart-warming message and a plain but beautiful heroine. Truly, Queen belongs to Kangana Ranaut. She portrays her character so realistically, it's difficult to understand where Rani stops and where Kangana begins. From makeup to clothing to body language, she is amazing as the shy Dilli girl.

Rani's look is au naturel to the extent that you can actually spot a pimple on her face during one scene in the movie!

But the rest of the cast are applaudable, too. Lisa Haydon's character Vijaylaxmi's French accent seems almost effortless; the actors playing Taka, Tim and Oleksander (Rani's roommates) breathe life into their characters, making them so loveable I could hug them all. And I'm not a hugger.
Rajkummar Rao, as Rani's fiancé Vijay, makes you want to punch his character with all your strength. Really, really hard.

The movie really hits its stride in the second half. The first half is enjoyable, but Rani's real character development happens during the second half, in Amsterdam. Not only does the story move forward after interval, the cinematography brings a ray of sunshine into Rani's life. While in Paris she is gloomy and dismal; in Amsterdam she finds her silver lining.

Some scenes that I really loved: the mehndi ceremony and the song and dance; Rani's encounter with the thief, the 'Hungama' sequence, and going shopping with Vijaylaxmi in Paris; meeting her male roommates, the cooking contest, 'Indians best hain', and the whole lead-up to the ending in Amsterdam.

No spoilers, but the ending does not follow the typical Bollywood recipe. Steering towards the road-not-taken, Queen ends on a positive note - but it's a realistic one at that. You'll laugh, smile and cry from the moment you step into Rani's life, and you're guaranteed to leave the theatre with a wide grin on your face.

Please, go ahead and check out this movie. It's definitely the best film I've seen this year - and the best Bollywood film I've seen in a long time.
Still in theatres, Queen is doing very well at the box office. So be sure to book your tickets in advance to get the best seats!

If you've already seen Queen, tell me which scenes you loved - and which scenes, if any, you didn't care for.

Until next time, Geeks!
Posted by Unknown at 16:49