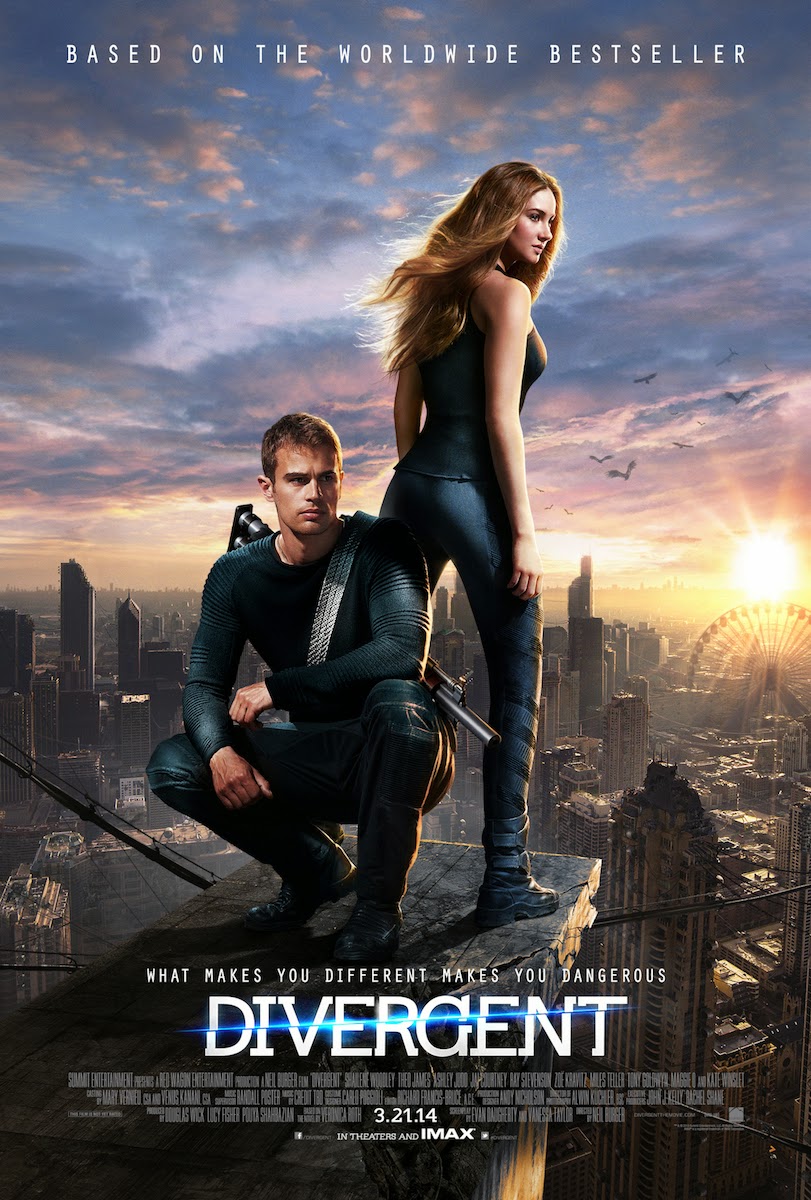 In a world divided by factions based on virtues, Tris learns she's Divergent and won't fit in. When she discovers a plot to destroy Divergents, Tris and the mysterious Four must find out what makes Divergents dangerous before it's too late.

I know I included Divergent in my list of highly anticipated movies last year, but after early reviews from both readers and non-readers turned out to be negative, my anticipation somewhat fizzled out.
Well, Divergent finally released in India today, so I went to watch the movie with incredibly low expectations.
Read on to find out whether the movie pulled off a Percy Jackson or a Catching Fire!


I quite liked the first three minutes of the movie. It started with a beautiful view of the Chicago skyline, mostly in ruins, with Tris, the protagonist, telling us the history of her city and giving us a brief description of all the factions - including her own, Abnegation (the selfless).

And it was all downhill from there.
From the countless coats of mascara on Tris and her mother's eyelashes (FABnegation, huh?) to some terrible acting by Ansel Elgort (who plays Tris' brother, Caleb); from the incomplete aptitude test to the drawn-out, boring Choosing ceremony...
Really, the movie was only about two and a half hours long, but to me it felt like an entire day had passed! Even when it came to some of my favourite scenes from the book, I found my mind wandering to far-off places and it took me a while to get back to the movie at hand.

However, I did enjoy some of the scenes involving the Dauntless (the brave): their introduction, the jumping in and out of trains, the welcoming of the initiates... but that was mostly because of the adrenaline-packed background music.
Hans Zimmer and Junkie XL's score was good, although adding those Ellie Goulding pop songs in the middle of an intense scene was a very bad idea. It took away from what little the scene was trying to offer.

Perhaps the director and his crew knew that the actors in this movie can't act to save their lives. Maybe that's why about eighty percent of the movie focused only on close-ups of their faces. Acting isn't just about expressions (which these actors lack), it's also about body language. Unfortunately there was no chance to judge their body language, because all that could be seen was their face and neck (and their makeup!).
I'd heard great things about Shailene Woodley (Tris) from critics and audiences alike. But I couldn't see what they were talking about. When thrown into a strange world within a simulation, Woodley didn't bat an eyelid. When her best friend's life was threatened, she was indifferent. Why?

As for Theo James (a.k.a Four)... well, he didn't look the part of the shy but strong Four, and he couldn't act the part, either. His character went straight from glaring at Tris to kissing her, without showing how he even fell for her in the first place.
Kate Winslet was wasted in the role of the main antagonist, Jeanine Mathews, head of Erudite (the intelligent). Ansel Elgort seemed to be channeling his inner Augustus Waters instead of playing Caleb Prior. You're in the wrong movie, pal!

Zoë Kravitz as Tris' best friend, Christina, was probably the only actor I liked. She was fun, fiesty and full of life. I guess she takes after her father, who played the role of Cinna in The Hunger Games.
Miles Teller as Peter was alright. He was supposed to be arrogant and funny, but I didn't laugh once.

Since this is an action movie, there was a lot of fighting and many scenes involved guns. But shaky cam was employed more than once during these scenes (probably so the movie could get a PG-13 rating) and the end result was not pretty.

There were several changes from the books, a major one being the ending. No spoilers, but I disliked it. It was illogical and ridden with plot holes. The book may not be a literary masterpiece, but at least its ending made sense!

In short, the movie was nothing more than bits and pieces of the book sewn together with a thread of illogical explanations and miserable acting skills.
I'm going to go with 1.5 stars out of 5 for Divergent.

Whether you're a book fan or a simple movie-goer, give this one a miss. Instead, use those two and a half hours to watch Queen or Catching Fire or any movie that won't bore you to death.
But if you're desperate to watch Divergent, take two and a half minutes and just watch the trailer instead. I can guarantee that it's much better than the actual film.

See you next time, Geeks!