'Pride and Prejudice' by Jane Austen: A Book Review 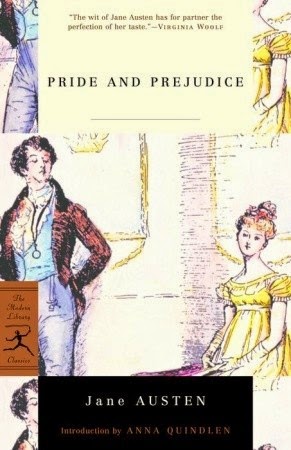 "It is a truth universally acknowledged, that a single man in possession of a good fortune must be in want of a wife."
So begins Pride and Prejudice, Jane Austen's witty comedy of manners--one of the most popular novels of all time--that features splendidly civilized sparring between the proud Mr. Darcy and the prejudiced Elizabeth Bennet as they play out their spirited courtship in a series of eighteenth-century drawing-room intrigues.
(Thank you, Goodreads!)

How do I begin my review? For I must tell you that I had, a twelvemonth ago, shied away from this very book. I was blind to the beauty of this tale of love and hate, of pride and prejudice. In vain have I struggled. It will not do.
Allow me to express myself, dear book.

I had actually read - or rather, tried to read - Pride and Prejudice about a year ago, but I never finished it. Maybe because the real action happens only after the half-way point. The first half is still very witty and enjoyable, so my judgement was probably impaired in those days.

Anyway, I love this book! I love the characters, the writing, the comedy, the romance, the twists and turns... I love everything about this book! Unfortunately I already knew the entire story as well as the who-betrays-whom aspects, but that didn't stop me from being engrossed in the novel.

I'm a big fan of love/hate relationships, and Elizabeth and Darcy's story is probably the best known among such relationships. I also really enjoyed reading about Jane and Bingley. We don't get to know Bingley too well, but I love Jane Bennet so dearly! In the beginning, she comes across as a Mary Sue (Miss I-can-do-no-wrong) but later you realise that Jane does have a lot of faults, making her a very real character.

Mrs. Bennet is a constant pain in the neck, and her husband provides for some much-needed humour. Sure, he can be mean at times, but with two ridiculous younger daughters (Lydia and Kitty) and a wife so dramatic, can you blame him?

Other characters in the story like Mr. Collins and Mr. Wickham are well fleshed-out, too. I should mention, however, that Charlotte Lucas (Elizabeth's best friend) could have been a little more developed, character-wise. Or was she supposed to be so... hollow?

This novel has a lot of quotes I really adore. Obviously, the first line of the novel (mentioned earlier in this review) is a personal favourite, but here are some other good ones:

"A lady's imagination is very rapid; it jumps from admiration to love, from love to matrimony in a moment."

Elizabeth's spirits soon rising to playfulness again, she wanted Mr. Darcy to account for his having ever fallen in love with her. "How could you begin?" said she. "I can comprehend your going on charmingly, when you had once made a beginning; but what could set you off in the first place?"
"I cannot fix on the hour, or the spot, or the look, or the words, which laid the foundation. It is too long ago. I was in the middle before I knew that I had begun."

"There is, I believe, in every disposition a tendency to some particular evil, a natural defect, which not even the best education can overcome."
"And your defect is a propensity to hate everybody."
"And yours," he replied with a smile, "is wilfully to misunderstand them.”

"We are each of an unsocial, taciturn disposition, unwilling to speak, unless we expect to say something that will amaze the whole room, and be handed down to posterity with all the eclat of a proverb."

In a nutshell, Pride and Prejudice is a masterpiece. If you're not a book person, or if you're not fond of nineteenth century writing, I'd recommend the P&P 1995 TV series starring Jennifer Ehle and Colin Firth. It's a six-episode series that I watched while reading the novel.
You could also try The Lizzie Bennet Diaries (produced by Hank Green, from Crash Course), a modern-day depiction of Elizabeth's life.

Here's the first episode, to give you an idea of what the show is like:


Are you a P&P fan like myself? Let me know in the comments whether you liked, loved, hated or despised this story.
Also, I like having a never-ending pile of books in my To-Read list, so feel free to recommend your favourite books to me so I can review them. :)

Goodbye, ladies and gentlemen!
Posted by Unknown at 13:34