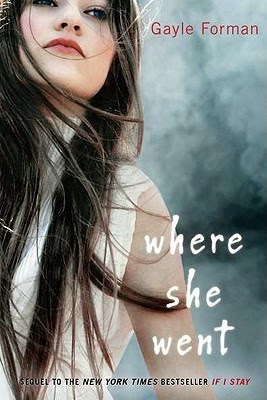 It's been three years since Mia walked out of Adam's life.
And three years he's spent wondering why.
When their paths cross again in New York City, Adam and Mia are brought back together for one life-changing night.
Adam finally has the opportunity to ask Mia the questions that have been haunting him. But will a few hours in this magical city be enough to lay their past to rest, for good - or can you really have a second chance at first love?
(Summary taken from Goodreads)

This two-book series seems to be the Next Big Thing in YA Fiction. The first one, If I Stay, didn't impress me at all. But the sequel was surprisingly much better!

Three years after the events of the first book, Where She Went is written from the perspective of Adam, now a famous rock star. He's the quintessential rock star: a tortured soul burning with passion and angst, doing his best to run away from fame and money and love - and memories of his ex-girlfriend Mia.
Mia, now a Julliard-graduated cellist, has been a total mystery to Adam ever since she recovered from the accident and walked out of his life without any explanations or justifications. But one night they collide and everything changes.

If I Stay didn't really have much of a story. It was too full of flashbacks and unnecessary details. Where She Went also takes place over the span of one day, but the flashbacks it offers actually help add dimensions to the story, so no complaints there. The writing has definitely improved on an emotional level.
Also, Adam isn't as boring a narrator as Mia was, so that's a welcome change!

But does this book really deserve the 4.17 rating it has on Goodreads?
Some of the explanations offered in the novel about what happened three years ago just aren't enough. They don't seem logical or thought-out. Adam's character is too clichéd. Mia seems like a completely different person. I still can't understand why they ever fell for each other in the first place and why Adam is so hurt by their breakup. I don't want to be told that their love is great, I want to see it for myself!

Let's look at some of my favourite quotes:

“Quitting’s not hard. Deciding to quit is hard. Once you make that mental leap, the rest is easy.”
“Really? Was that how you quit me?”

Letting go. Everyone talks about it like it's the easiest thing. Unfurl your fingers one by one until your hand is open. But my hand has been clenched into a fist for three years now; it's frozen shut. All of me is frozen shut. And about to shut down completely.

To sum up, Where She Went is miles ahead of its prequel, although still not deserving of the multiple 5-star ratings it has received online by doting fans. I didn't get emotional at all while reading this book although practically everyone else begs to differ.
I'd recommend you to skip the first book, If I Stay, and just read this one as a standalone novel. You won't be missing out on much, trust me.

What did you think about this series, and particularly the sequel? Let me know in the comments. Also, don't forget to like my Facebook page here so you don't miss any Geekie updates!