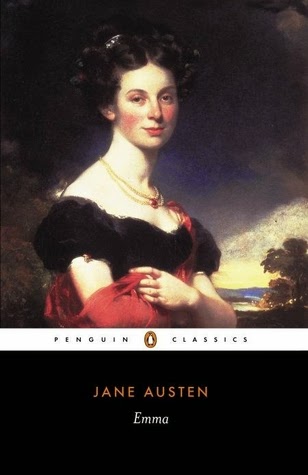 'I never have been in love; it is not my way, or my nature; and I do not think I ever shall.'

Beautiful, clever, rich - and single - Emma Woodhouse is perfectly content with her life and sees no need for either love or marriage. Nothing, however, delights her more than interfering in the romantic lives of others. But when she ignores the warnings of her good friend Mr Knightley and attempts to arrange a suitable match for her protegee Harriet Smith, her carefully laid plans soon unravel and have consequences that she never expected. With its imperfect but charming heroine and its witty and subtle exploration of relationships, Emma is often seen as Jane Austen's most flawless work.

When asked about the character Emma, Jane Austen said that she's "a heroine whom no-one but myself will much like". For the first half of the book, this is quite apt. Emma is selfish, manipulative and meddlesome - but her intentions are pure.

I think in comparison to Pride and Prejudice, Emma's storyline is much more complicated. A vast number of important characters, all involved in multiple love triangles... I think that's one thing that makes Emma so much more modern than it's supposed to be. It's nearly as dramatic as some of those television shows we have today.

There are a lot of shocking twists and turns in the story, but sadly I was already aware of them all thanks to Aisha, the Bollywood adaptation of this novel. But still, it was a lot of fun reading about all the chaos that ensues thanks to Emma's many attempts at matchmaking.

I have to be honest and tell you that it took me a long time to get through this book - about two weeks, to be precise. Up until Part Three of the novel, I wasn't really that interested in the story or the characters. Don't get me wrong - I was starting to like Emma a lot (but that was probably because of her character from the modern-day adaptation, Emma Approved) and her interactions with Harriet, Mr. Knightley and Frank Churchill were really engaging right from the beginning, but Part Three is where everything goes up in flames, and that's where about eighty percent of Emma's character development occurs. Not to mention, that's when the romance finally sets in!

The writing style is good, but there really weren't any quotes that really stuck in my head, apart from one or two. But the proposal at the end was just completely adorable. I don't want to give any spoilers in case you don't know who Emma ends up with, but I have to say that the declaration of his love is almost as good as Darcy's from P&P. Almost.

"If a woman doubts as to whether she should accept a man or not, she certainly ought to refuse him. If she can hesitate as to 'Yes', she ought to say 'No' directly. It is not a state to be safely entered into with doubtful feelings, with half a heart."

“I may have lost my heart, but not my self-control.”

"I cannot make speeches, Emma," he soon resumed; and in a tone of such sincere, decided, intelligible tenderness as was tolerably convincing. "If I loved you less, I might be able to talk about it more. But you know what I am. You hear nothing but truth from me. I have blamed you, and lectured you, and you have borne it as no other woman in England would have borne it. Bear with the truths I would tell you now, dearest Emma, as well as you have borne with them. The manner, perhaps, may have as little to recommend them. God knows, I have been a very indifferent lover. But you understand me. Yes, you see, you understand my feelings and will return them if you can. At present, I ask only to hear, once to hear your voice."

I think the main reason I like the novel as much as I do is because of the webseries, Emma Approved. I'd been watching the episodes and reading the novel side-by-side, until I ran out of episodes to watch because Emma Approved is only around the half-way point so far.
But I have to say that I prefer Snarky Alex Knightley and adorable fellow Hufflepuff Harriet Smith from Emma Approved to their literary counterparts. As for Emma, I've already mentioned how much I adore the character from the web series.

In short, while Emma is a witty and interesting read, it is not Jane Austen's most flawless work in my opinion. Fine, I've only read two of her novels yet, but P&P beats Emma any day.

I'm going with 3.5 stars out of 5 for Emma, judged solely on my interest in the novel and not the web series.

Whether you've read the book or not, I simply must insist that you watch Emma Approved right now! Set in the contemporary world, the web series focuses on Emma Woodhouse, an entrepreneur, lifestyle coach and event manager who makes people's lives better - or at least tries to!

What do you think of  the novel and the web series? Leave a comment and give me your opinions. What is your favourite Jane Austen book? Do you have any suggestions as to which Austen novel I should read next?