'Looking for Alaska' by John Green: A Book Review 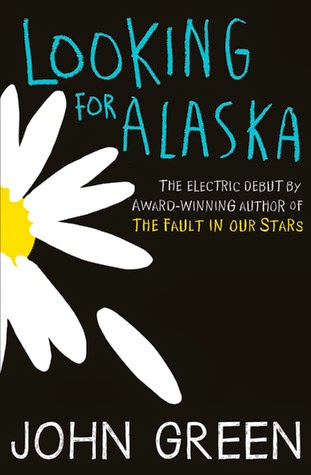 Before. Miles "Pudge" Halter's whole existence has been one big nonevent, and his obsession with famous last words has only made him crave the "Great Perhaps" (François Rabelais, poet) even more. Then he heads off to the sometimes crazy, possibly unstable, and anything-but-boring world of Culver Creek Boarding School, and his life becomes the opposite of safe. Because down the hall is Alaska Young. The gorgeous, clever, funny, sexy, self-destructive, screwed-up, and utterly fascinating Alaska Young, who is an event unto herself. She pulls Pudge into her world, launches him into the Great Perhaps, and steals his heart.

After. Nothing is ever the same.

Why do I do this to myself?

Okay, a quick recap: what did I think about John Green's other novels?
The Fault in Our Stars was good, although quite pretentious. An Abundance of Katherines was okay, although somewhat pretentious. Paper Towns was the worst book I've ever read, and every word on every page of that book was just overflowing with pretense.

So why did I think Looking for Alaska would be any different? Because everyone says it's his best work, apart from TFIOS? Because it's going to be made into a movie? Because I love Hank Green's digital works and I wanted to give his brother another chance?

I don't know why I read this book, but I wish I hadn't.

This is John Green's first novel, but it might as well have been called Paper Teens or Looking for Katherine or The Fault in Our Cigarettes. Honestly, doesn't John Green ever get tired of writing the same story again and again and again? Unpopular and geeky protagonist falls for sexy, confident, interesting girl (or boy, in TFIOS's case) and said protagonist's life changes forever.

In this novel, I assume we're supposed to loooove Alaska. She reminds me of Margo from Paper Towns. Bitchy, bipolar, annoying... but, of course, she's gorgeous and our protagonist is madly in love with her, for reasons I do not quite comprehend.

To make the readers think that Alaska is an independent woman who doesn't care about what people think, John Green makes her an alcoholic, cigarette-smoking feminist who just 'loves sex'. (Alaska talks about her love for sex at least five times in the novel. Okay. Fine. We get it.)
There's nothing wrong with drinking or smoking or having sex, but did he have to shove that fact into our faces every time Alaska was mentioned?

Miles is a pathetic, pretentious fellow who succumbs to peer pressure and starts drinking and smoking because his friends do. I know that this is the truth, that a lot of teenagers have these habits, but why didn't Miles ever think about what he wants? Before coming to this new boarding school, he'd never smoked a cigarette or had a drink. But his new friends offer him some, and who is he to say 'no'?
There's one scene where he coughs after trying to smoke, and after that, he smokes like a chimney. I'd like to have seen a better transition.

The Colonel, Lara and Takumi (the supporting characters) made no impact on me. I did not care for any of them... or for Miles and Alaska.

The entire novel was full of crude jokes, content that I would consider explicit for a book about high school students, and pretentious thinking. It was so exhausting to read this book.

Here are some quotes from the book, and my opinion of each of them:

“When adults say, "Teenagers think they are invincible" with that sly, stupid smile on their faces, they don't know how right they are. We need never be hopeless, because we can never be irreparably broken. We think that we are invincible because we are. We cannot be born, and we cannot die. Like all energy, we can only change shapes and sizes and manifestations. They forget that when they get old. They get scared of losing and failing. But that part of us greater than the sum of our parts cannot begin and cannot end, and so it cannot fail.
(We cannot be born and we cannot die? Yes, we can. Energy cannot be destroyed, but we can. Stop being so pretentious, Miles.)

“It's not because I want to make out with her."
Hold on." He grabbed a pencil and scrawled excitedly at the paper as if he'd just made a mathematical breakthrough and then looked back up at me. "I just did some calculations, and I've been able to determine that you're full of shit.”
(Okay, this was funny. I laughed at this part.)

I have had enough of John Green. Honestly. This book is not well-written, it's even more pretentious than Paper Towns (which is saying something), and it's a classic example of how a writer's debut is never his best work.

Sorry, JG.
I'm going to go with 2 stars out of 5 for Looking for Alaska.
Better than Paper Towns, at least, but it's pathetic compared to TFIOS and AAOK, which were both funny and entertained me thoroughly.

Looking for Alaska has a huuuuge fan following, so let me know in the comments below if you disagree with my review - and be sure to tell me what you loved and didn't love about this book.