'Four: A Divergent Collection' by Veronica Roth: A Book Review 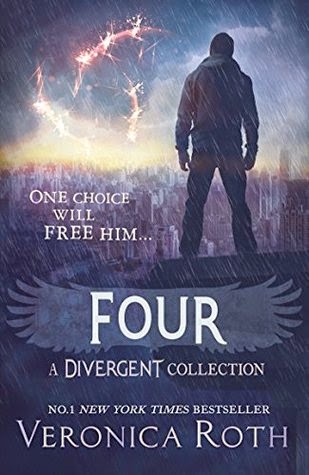 Two years before Beatrice Prior made her choice, the sixteen-year-old son of Abnegation’s faction leader did the same. Tobias’s transfer to Dauntless is a chance to begin again. Here, he will not be called the name his parents gave him. Here, he will not let fear turn him into a cowering child.

Newly christened 'Four', he discovers during initiation that he will succeed in Dauntless. Initiation is only the beginning, though; Four must claim his place in the Dauntless hierarchy. His decisions will affect future initiates as well as uncover secrets that could threaten his own future—and the future of the entire faction system.

Two years later, Four is poised to take action, but the course is still unclear. The first new initiate who jumps into the net might change all that. With her, the way to righting their world might become clear. With her, it might become possible to be Tobias once again.

Hasn't it been a while since my last book review? More than two weeks!!

Anyway, I finally got around to reading the Divergent short stories from Four's perspective. It makes for a nice, quick read - I started and finished it today - because these stories are set in a time much before the events of Allegiant and Insurgent, so all it did was remind me how much I loved the first book in the series.

There are four stories in this book (whoa, I just realised why!) plus three additional Divergent scenes from Four's perspective.
The first one, The Transfer, is about his Choosing Ceremony. The Initiate is self-explanatory. The Son takes place after his initiation but before the first novel, and the final story, The Traitor, talks about Four's life after he meets Tris.

Unlike in Allegiant, Veronica Roth does a good job writing from Four's perspective. Personally, I always liked Four better than Tris, so I really enjoyed getting some in-depth back story about the guy.
A few secondary characters are also seen - Eric, Max, Zeke, Shauna and Tori are prominent characters - but apart from the first two, none of them make a lasting impact.

I didn't like The Son as much as the other three stories because it focused on a storyline related to Insurgent that I was never fond of. The Transfer and The Initiate were very exciting, and seeing Tris through Four's eyes (without bringing up bad memories of Allegiant) was refreshing.

The three bonus scenes were all Tris-centric, probably targeted towards the FourTris fangirls. While I don't consider myself one of them, I do appreciate romance!

There are some great quotes hidden in this collection. Here are some that I took a fancy to:

Dead people can be our heroes because they can't disappoint us later; they only improve over time, as we forget more and more about them.

One thing I know: For helping me forget how awful the world is, I prefer her to alcohol.

In that moment I'm able to accept the inevitability of how I feel, though not with joy. I need to talk to someone. I need to trust someone. And for whatever reason, I know, I know it's her.
I'll have to start by telling her my name.

To conclude, this book doesn't offer anything new to the Divergent universe. Sure, there are a few minor things here and there that haven't been disclosed before, but this collection is only a companion to the trilogy. It's not a spinoff, prequel or a sequel.

I'm going to go with 4 stars out of 5 for Four: A Divergent Collection.
This book strengthened my allegiance to the Divergent trilogy, and it almost made me forget how bad the final book was.
I think this book is a must-read for all fans of the trilogy. From action to humour to romance, this one's got it all!

What did you think of Four's stories? Let the comment box know.