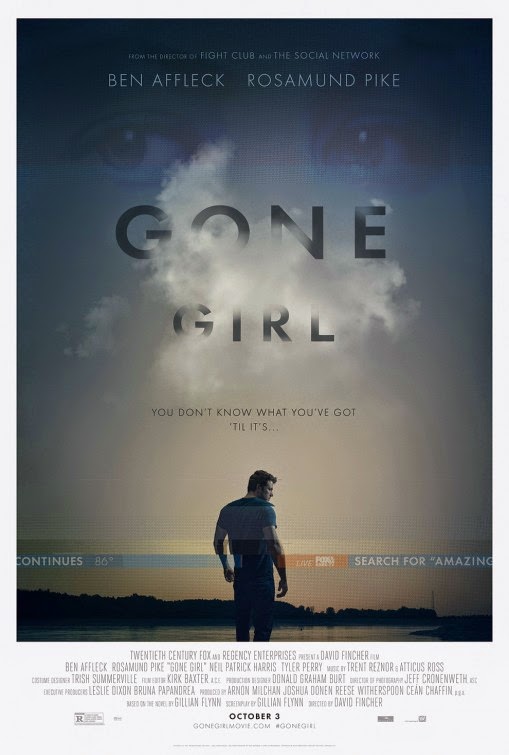 On a warm summer morning in North Carthage, Missouri, it is Nick and Amy Dunne’s fifth wedding anniversary. Presents are being wrapped and reservations are being made when Nick’s clever and beautiful wife disappears. Husband-of-the-Year Nick isn’t doing himself any favours with cringe-worthy daydreams about the slope and shape of his wife’s head, but passages from Amy's diary reveal the alpha-girl perfectionist could have put anyone dangerously on edge. Under mounting pressure from the police and the media—as well as Amy’s fiercely doting parents—the town golden boy parades an endless series of lies, deceits, and inappropriate behavior. Nick is oddly evasive, and he’s definitely bitter—but is he really a killer?

I'd read this book about a month ago and I'm not sure why I didn't review it... probably because I didn't know how to.
But now that I've seen the movie (which, to be honest, is one of the best book-to-movie adaptations I've seen till date), I just had to do a blog post about it.

Let me be honest with you - this book and this movie may scar you. You might spend some time thinking that people can't be that crazy in real life... can they? You might even wonder what you'd do if any of it happened to you.
But you probably won't be able to stop thinking about it for quite a while.

Nick Dunne isn't the kind of character you can root for. He's the protagonist of this novel, and who likes a protagonist that can't be trusted? Nobody. But that's the beauty of this story. We may not like villains, but we absolutely adore stories about them. And that's really where Gone Girl hits the mark.

This story has more negative characters that you can count. There's creepy and crazy oozing from every main character on paper or on screen. There will be a hundred thoughts running through your head as you follow the story. This book or this movie has a lot of sucker-punch moments, especially a really big shocker around the middle of the story. And it only gets better and better with every passing minute of the second half.

Gillian Flynn is quite the writer. She has a way with words, although that way is rather... twisted.
Here are some great quotes from the book:

“My mother had always told her kids: if you're about to do something, and you want to know if it's a bad idea, imagine seeing it printed in the paper for all the world to see.”

“I often don't say things out loud, even when I should. I contain and compartmentalize to a disturbing degree: In my belly-basement are hundreds of bottles of rage, despair, fear, but you'd never guess from looking at me.”

“Because you can't be as in love as we were and not have it invade your bone marrow. Our kind of love can go into remission, but it's always waiting to return. Like the world's sweetest cancer.”

“We weren’t ourselves when we fell in love, and when we became ourselves – surprise! – we were poison. We complete each other in the nastiest, ugliest possible way.”

David Fincher's direction is also exceptional. He truly has brought the book to life. But the credit goes not just to him, but to the actors as well.

I'll admit that when I saw the trailer, I wasn't too psyched about it. Ben Affleck as Nick was still understandable, but Rosamund Pike was not the Amy I had imagined.

However, she did a really good job portraying Amy. And trust me, Amy is one of the most complex characters to portray on screen.
Neil Patrick Harris, as Amy's ex-lover Desi Collings, was just the perfect mix of creepy and cool. Carrie Coon, who plays Nick's sister Margo, and Tyler Perry, who plays Nick's lawyer, are both commendable as well.

I'm going to go with 4 stars out of 5 for Gone Girl: the book and the movie.
It's the perfect book to read just before bedtime, in the dark, and the perfect movie to watch if you're looking for something that's equal parts suspense and humour. I'd recommend it for all mature audiences and readers.

Otherwise, go for it. Read the book, watch the movie. Make the most of this weekend. You won't regret it.
Here's the trailer, for the curious:


If you've read the book or seen the movie, let me know what you thought about the story. What did you think of that ending? How had you expected it to end?