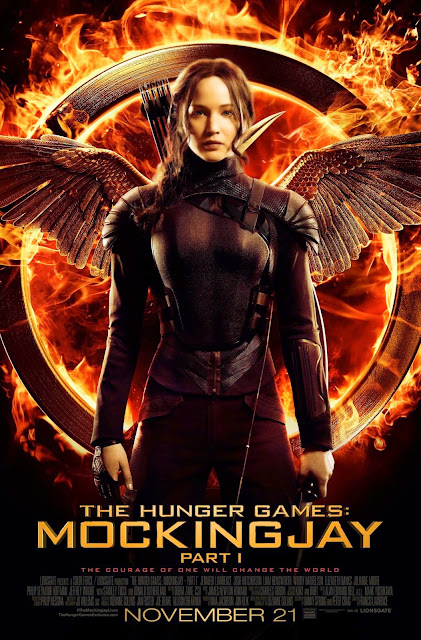 In District 13, after she literally shatters the games forever, Katniss Everdeen works to save Peeta and a nation moved by her courage under the leadership of President Coin and the advice of her trusted friends.

And now, here comes my review for the penultimate THG movie.

The movie starts off a little slowly, with Katniss recovering from the events of the Quarter Quell in District 13, as Plutarch Heavensbee and President Coin attempt to convince her to take on the role of the face of the rebellion: the Mockingjay.

But then the movie picks up some pace, and you see a lot of crucial moments from the book come to life: Katniss' visit to the ruins of District 12, how she finds herself struggling to keep the rebellion and Peeta Mellark alive at the same time, and how she inspires the district rebels in ways she could have never imagined.

Some of my favourite scenes include the famous "If we burn, you burn with us!" sequence, Katniss' rendition of The Hanging Tree (this hauntingly beautiful song is still stuck in my head, by the way), and any scene involving Haymitch and Effie (or as the fans like to call them, Hayffie!).
I also loved the interactions between Katniss and Prim. This is, of course, one of the most important relationships in the series, and with every movie, this sisterly bond only gets stronger.

James Newton Howard's background score will give you chills and may bring you close to tears. I certainly found myself getting emotional a few times throughout the movie (especially towards the end), and the credit for that must go not just to the music but also to the actors on-screen.

Jennifer Lawrence continues to embody the character of Katniss with such finesse that sometimes you wonder if she really is just acting. Julianne Moore wasn't how I'd imagined President Coin to be like, but she pulls off the character - and the hair - very well.
A special mention to Elizabeth Banks as Effie - her character actually doesn't appear until the very end of the book, but I'm glad they gave her a bigger role. She provides quite a lot of comedic relief, and who doesn't love movie Effie, after all?

And Josh Hutcherson as Peeta... oh, I'm not supposed to give any spoilers, but even with so little screen time (he probably appears for not more than ten minutes), he delivers a very... memorable performance. I'm really looking forward to his role in the finale, where there's going to be a lot of scope for character development for the boy with the bread.

I'm not very fond of Liam Hemsworth or his character Gale, so he didn't make much of an impression on me, but I suppose the average movie goer wouldn't have anything bad to say about him in this movie.

In short, Francis Lawrence has done it again. With Catching Fire, he had had a lot to work with - interesting turn of events, the Quarter Quell, exciting new characters - but in this movie, by adding a few powerful scenes and cutting down on the slower moments, he commands your attention for every second of those 123 minutes. Well done, Francis, buddy. Can't wait to see what you have in store for us next time.

I'm going to go with 4.25 stars out of 5 for this one.
A great movie adaptation for a somewhat drawn-out book, Mockingjay Part 1 is equal parts action, emotion and tragedy.
If you're a fan of the books or the movies, you wouldn't want to miss this one. So go to your nearest theatre, grab your tub of popcorn, and get ready for the movie of the year, because this one is simply...

Have you already seen Mockingjay Part 1? Let me know what you thought of the movie. Where had you expected the movie to end?
And if you've been living under a rock and haven't seen the trailer yet, check it out below:

The Hunger Games: Mockingjay Part 2 hits theatres on 20th November, 2015. I definitely will be waiting for that one with bated breath.

Meanwhile, I think I'll finish that Harry Potter movie marathon. This IS the Ultimate Geek Week, after all!
Next blog post will probably be a book review for The Cuckoo's Calling by Robert Galbraith (it's actually JK Rowling, but shhhh! That's a secret!), which I'm halfway done with.

Until then, bye-bye, my dear Mockingjays!