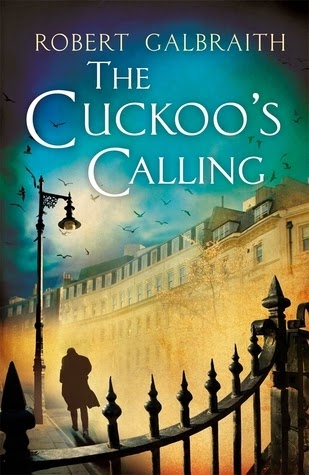 After losing his leg to a land mine in Afghanistan, Cormoran Strike is barely scraping by as a private investigator. Strike is down to one client, and creditors are calling. He has also just broken up with his longtime girlfriend and is living in his office.
Then John Bristow walks through his door with an amazing story: His sister, the legendary supermodel Lula Landry, known to her friends as the Cuckoo, famously fell to her death a few months earlier. The police ruled it a suicide, but John refuses to believe that. The case plunges Strike into the world of multimillionaire beauties, rock-star boyfriends, and desperate designers, and it introduces him to every variety of pleasure, enticement, seduction, and delusion known to man.
You may think you know detectives, but you've never met one quite like Strike. You may think you know about the wealthy and famous, but you've never seen them under an investigation like this.

Today I'm reviewing a murder mystery novel by our very own Queen, JK Rowling. She actually wrote The Cuckoo's Calling under a pseudonym (Robert Galbraith), and the novel actually did become a success before people found out the truth. After that, of course, everybody and their mother decided to read this book. Including...

Let me be upfront and tell you that I had tried to read Rowling's other book for adults, The Casual Vacancy, and I hadn't even been able to get through it. I don't know what it was about the writing or the story (or lack thereof) or the innumerable characters, but after that, I'd assumed that Rowling just couldn't write books that weren't about Harry Potter.

Well, this one proved my hypothesis wrong.

The Cuckoo's Calling is a little different from all the other murder mysteries I've read. First of all, the novel is written in third person with two perspectives: those of Cormoran Strike (the detective) and his assistant, Robin.
Instead of focusing on the crime itself, this novel takes a step back and chooses to examine the more human aspects of life. There are quite a few chapters that don't do much for the murder mystery, but are important to understand Strike's past and present. I suppose this way of writing was chosen because this book is part of a series, but at some point, it did bother me that the story was moving at such a slow pace.

But though the first fifty or so pages might be slow, the rest of the pages are very engaging. I found myself staying up nights to read this book, and finally, when I'd finished the book at 3:30 am a few days ago, I felt like I'd been part of that investigation all along.

Cormoran Strike is described as a tall and large, beefy man, and in my mind's eye, I saw Philip Seymour Hoffman as this protagonist (rest in peace, sir). I know he doesn't fit the character very well, but... the mind sees what the mind sees.
Strike isn't as fascinating a detective as, say, Sherlock Holmes or Hercule Poirot. This murder isn't as scandalous as you'd assume it to be. Strike's method of investigating isn't that incredible, either. Most of his interactions with the characters are in the form of interrogations. And those interrogations seemed to lead nowhere. When I'd only had around a hundred pages left to read, I had started to wonder how on earth Cormoran Strike was going to solve the mystery of Lula Landry's death without any clues or leads.

And then, suddenly, the ending sprang upon me, and it turned out that Strike was quite an intelligent man, after all. I'd had a hunch that I knew who the killer was (well, I kept jumping from one suspect to another, to be honest, but it still counts!), but I hadn't any idea about the motive or the means, and Strike explained it all very nicely.

One character I really appreciated was his assistant, Robin. A beauty with brains, I imagined Emma Watson with her quick wit and British accent as Robin throughout the novel. There isn't any romantic angle between them in this novel, but I'm wondering if that might change in the sequel.

So with the somewhat slow-paced storyline, a plethora of supporting characters you might just mix up, and the old-fashioned style of interrogation, what saves this novel at the end of the day is the writing.
Harry Potter might have been a children's book, but the way it was written would never have let you in on that little fact. JK Rowling can write, incredibly well at that, and that's exactly how she makes Cormoran Strike's investigations linger in your thoughts.

With that in mind, here are some quotes that stood out:

How easy it was to capitalize on a person’s own bent for self-destruction; how simple to nudge them into non-being, then to stand back and shrug and agree that it had been the inevitable result of a chaotic, catastrophic life.

It was nearly eight before he returned to the office. This was the hour when he found London most lovable; the working day over, her pub windows were warm and jewel-like, her streets thrummed with life, and the indefatigable permanence of her aged buildings, softened by the street lights, became strangely reassuring. We have seen plenty like you, they seemed to murmur soothingly, as he limped along Oxford Street carrying a boxed-up camp bed. Seven and a half million hearts were beating in close proximity in this heaving old city, and many, after all, would be aching far worse than his.

People liked to talk; there were very few exceptions, the question was how you made them do it. Some were amenable to alcohol; others liked a spotlight; and then there were those who merely needed proximity to another conscious human being. A subsection of humanity would become loquacious only on one favorite subject; it might be their own innocence, or somebody else's guilt.

Rowling has already demonstrated her talent for writing mysteries through the Harry Potter series (especially The Chamber of Secrets, The Goblet of Fire and The Deathly Hallows), and she weaves a believable murder mystery with her words in this book, too.
Sure, it may take some time for the novel to appeal to you, but give it a few chapters' worth of time, and it may surprise you.

I'm going to go with 3.5 stars out of 5 for The Cuckoo's Calling.
Once I'm done with the books I'm currently reading, I definitely will check out the sequel (The Silkworm), which sounds even more interesting than this one.

Have you read The Cuckoo's Calling? What did you think of this mystery? Had you guessed the murderer before the ending? Let me know all about your thoughts in the comments below.