'The Silkworm (Cormoran Strike #2)' by Robert Galbraith: A Book Review 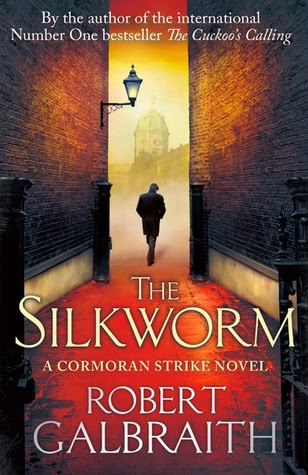 When novelist Owen Quine goes missing, his wife calls in private detective Cormoran Strike. At first, Mrs. Quine just thinks her husband has gone off by himself for a few days—as he has done before—and she wants Strike to find him and bring him home.
But as Strike investigates, it becomes clear that there is more to Quine's disappearance than his wife realises. The novelist has just completed a manuscript featuring poisonous pen-portraits of almost everyone he knows. If the novel were to be published, it would ruin lives—meaning that there are a lot of people who might want him silenced.
When Quine is found brutally murdered under bizarre circumstances, it becomes a race against time to understand the motivation of a ruthless killer, a killer unlike any Strike has encountered before...

A killer on the loose, a scandalous manuscript and a private detective like no other... is there a better recipe for a murder mystery?

Today I'm reviewing The Silkworm by Robert Galbraith (JK Rowling), the second novel in the Cormoran Strike series. The first book, while complex and well-written, did seem a little boring at times and failed to grasp my attention for too long.

But things have changed with this novel, because The Silkworm is simply spectacular!

Cormoran Strike is just recovering from his foray into the limelight after solving the mystery of a famous model's death, and although he's quite well-off now, his personal and social life is still very much a struggle. His ex-fiancée is getting married, he isn't getting along with his assistant Robin's fiancé, and his relationship with the police is rocky (at best).

And then he stumbles upon Owen Quine's case and everything changes.

The dynamics of Strike and Robin's relationship (or rather, friendship) in this novel change quite a bit, and it's very interesting to read their exchanges.
In the first Cormoran Strike novel, the detective's way of interrogating his suspects did seem a little dull and repetitive. Thankfully, things stay exciting and different in this book, and the varied characters and all their possible motives leave you wondering who could have committed this crime and how.

As always, JK Rowling's writing is beautiful and thought-provoking. Here are the quotes I liked best.

"Writers are a savage breed, Mr. Strike. If you want life-long friendship and selfless camaraderie, join the army and learn to kill. If you want a lifetime of temporary alliances with peers who will glory in your every failure, write novels.”

And a faint glow of hero worship, almost neglected by years of neglect and unhappiness, flickered again behind her tired eyes. Perhaps it had been rekindled because her hero, like all the best heroes, was dead; perhaps it would burn for ever now, like an eternal flame, and she would forget the worst and cherish the idea of him she had once loved...

Strike had always marvelled at the strange sanctity conferred upon celebrities by the public, even while the newspapers denigrated, hunted or hounded them. No matter how many famous people were convicted of rape or murder, still the belief persisted, almost pagan in its intensity: not him. It couldn't be him. He's famous.

The secret to any successful murder mystery is this: the identity of the murderer is always the most unexpected one. Keeping that in mind, I had an idea of who it could be, and why, and as the story proceeded, I was almost completely sure that I had solved the case.

And then Cormoran Strike revealed his findings, and of course, I had been wrong about the killer. Then followed the 'Oh!' moment where it all made sense and I wondered how I had never seen that coming.
In short, a very, very successful murder mystery.

I'm going to go with 4 stars out of 5 for The Silkworm.
In comparison to The Cuckoo's Calling, this sequel was an unexpected delight and every chapter left me longing for me.
And no spoilers here, but the ending has ensured that I will definitely get my hands on the third novel (hopefully, there will be one) as soon as it releases.
I can't wait to find out more about Strike's life, about his assistant's life, and about all the many potential murders that can be solved by this spectacular duo.

Kudos to you, JK Rowling!
Did you enjoy The Silkworm as much as I did? Or did you disagree with everything I said in this review? Talking about books creates a special bond, and I'd love to have that bond with you. So comment below!

I'm currently reading an incredible non-fiction/self-help book by Scott Adams. While I won't be reviewing it, I definitely plan to share his views with you. Until then, have a great day! :)