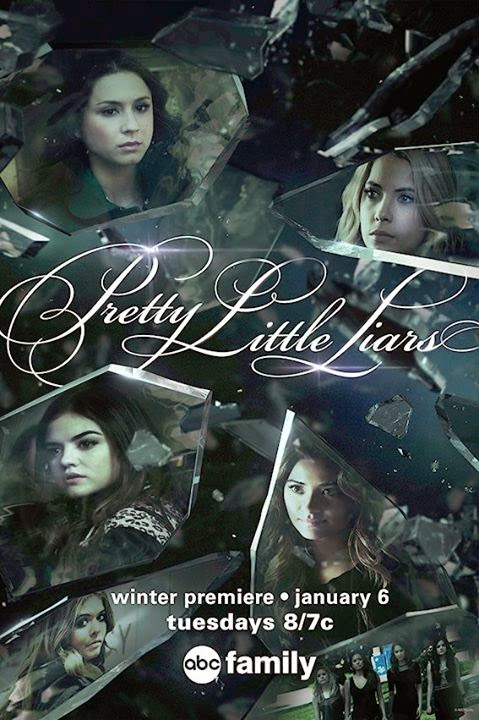 Alison's trial is coming to a close, and the outcome looks even more bleak when the prosecution calls a surprise witness that not only paints Alison in a bad light but also the PLLs and Mike. Desperate to find any evidence or witness to save their friends, Aria, Emily and Spencer race to find someone or something that can prove Ali's innocence and put an end to this nightmare. Meanwhile, Mike becomes a target of "A" when it looks like he might be called to testify, and Ezra and Caleb have differing opinions on what he should do.

Crazy things happen in Rosewood every day, and you can never tell when the most random characters might pop up again to take the stand in a murder trial. Well, Mona's BFF Lesli does exactly that, revealing that Mona sent her a letter about being threatened by Alison. Amidst tears, she also drags Mike and Hanna into the topic of conversation, claiming that they were paranoid about Mona's room and belongings.

But Alison insists that she was at the playground when the murder happened, and she thinks someone else might have been there too, because she saw someone wearing a scarf inside a pipe. Was someone sleeping there?
Apparently, yes. A Rosewood High student who took shelter in the playground heard Alison's voice. But Ali's lawyer doesn't think this makes for a good alibi, given that the girl was high and drunk only a few hours before the incident occurred.

Awkwardness ensues when Spencer runs into Toby after a very long time. He's still a cop so that he can protect his (ex?)girlfriend from harm, but Spencer subtly lets him know that she has other people to seek comfort from - like Melissa's male roommate from London.
But by the end of the episode, Toby realises that Lieutenant Tanner is never going to take him seriously as a cop because of his love life, so our hero puts down the badge and tells Spencer that he will never choose policemanship over her.

Meanwhile, Aria's afraid that her brother Mike will come clean about Mona's 'fake death turned real death' plan. Sure, it could save Hanna and Alison, but 'A' would never let Mike get away with it. She commands Ezra to have a guys' night in with Mike at his cabin in the woods so he can be away from the trial, but Caleb gets there first and convinces Mike to tell the police what he knows.
Mike runs away from them and is beaten up and captured by 'A' (who also shoots arrows at Caleb and Ezra), but Lt. Tanner takes no notice when the men try to file a complaint against this mystery villain.
Aria is unable to get in touch with her brother and calls Andrew to enlist his help, but Mr. Brawny-with-Brains is MIA.

Alison and Hanna, back at the jailhouse, have to physically hurt themselves to be able to get away with discussing their plans. Alison's lawyer manages to confiscate a note from them where they were attempting to decode Mona's mystery riddle from last week's episode, but she can't make head or tail of it.

Ali's lawyer calls her to the stand and demonstrates that due to Alison's childhood arm injury, it would have been impossible for her to have used brute strength and force against Mona in order to kill her.
The prosecution, however, overrides this by bringing up an archery prize Ali won in her childhood. But she hadn't actually played - she'd rigged the competition in order to win. Too bad nobody would believe her if she said so.

The jury finally comes to a decision in the final two minutes of today's episode. Alison DiLaurentis has been found GUILTY of Mona Vanderwaal's murder.
And not just Alison, but the three Liars are taken into custody as well.

I still can't believe Emily and Spencer found the sleeping girl from the playground based on the description of a scarf that they hadn't even seen with their own eyes. Television, I tell you.

And Toby and Spencer, back together? I know that 'Spoby', as they're fondly called, have about a billion lovesick fans, but I just don't see the spark that had been there in the first few seasons. Why not let Spencer be single for a few seasons instead?

I'm not sure why all the Liars have been arrested. I thought the prosecution believed that Alison had just one accomplice. Then on what grounds are they arresting Aria, Spencer, or Emily?

In this episode, he got incredibly jealous of Ezra... could that be why he'd shoot arrows at him later on? He was also the only person who was told that Mike was going to spend a night at Ezra's cabin. Plus, in the final 'A' scene, we see the masked figure pinning a corsage on a suit. Does this mean 'A' is a man?

How are the Liars going to get out of this one? Will we finally find out who #BigA is, or is it going to be another cop-out? And what's up with all the 'dollhouse' business that we see in the promo?

What do you think the next episode will be about? And if you've come across the infamous 'Daisy' spoilers, do you think it'll all be true? And can someone as handsome as Andrew really be so evil?