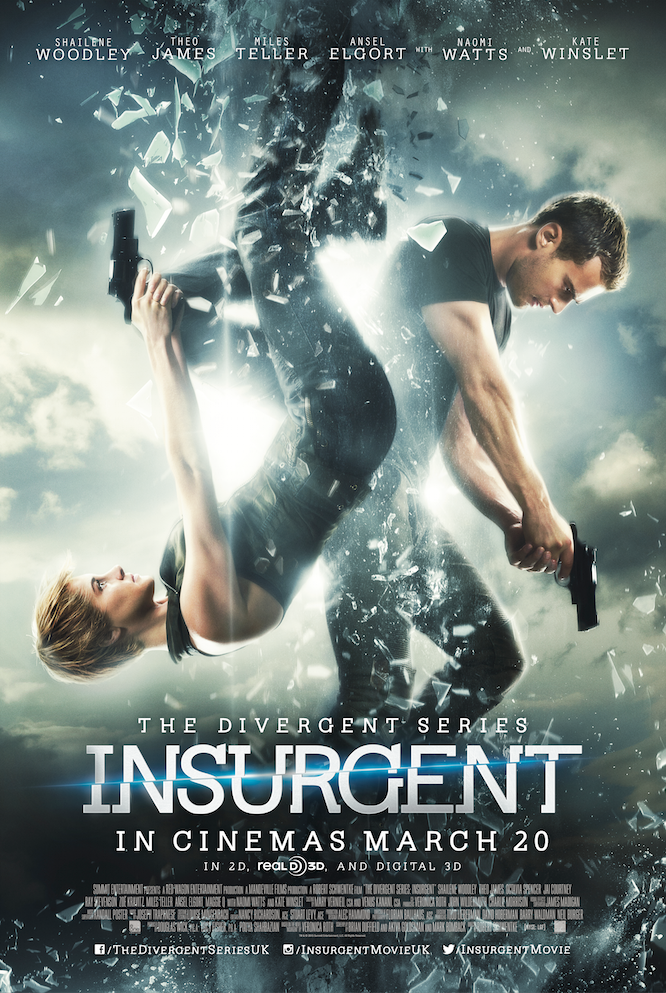 Beatrice Prior must confront her inner demons and continue her fight against a powerful alliance which threatens to tear her society apart with the help from others on her side.

To be honest, I had relatively low expectations for Insurgent, the second movie in the Divergent series. The first one was a complete letdown, trailers and previews made this sequel look completely different from the book, and its Rotten Tomatoes rating was around 32%.

But I was still psyched to watch it, because a) it was my nineteenth birthday, b) I was watching it in 3D, and c) the trailer still looked mindblowingly awesome.

So when I walked out of the theatre after two hours, I was pleasantly surprised. Read on to find out why.

Insurgent picks up right after the ending of Divergent. Tris, Four, Caleb and Peter are now seeking refuge at Amity headquarters. Meanwhile, Jeanine's flunkies have recovered a mysterious box that claims to hold the key to "the future our people deserve". But this box can only be opened by a Divergent - that too, someone who shows the highest level of Divergence... someone who sounds exactly like Tris.

One of the main issues I'd had with Divergent was that the movie was too boring and slow-paced. Despite having the best book of the trilogy as its base, Divergent had failed to pull me in.

Insurgent, on the other hand, keeps up the pace all the way till the end. I wasn't bored for a single moment, although the director seems to have rushed through some of the parts of the book that I'd been looking forward to watch.

Shailene Woodley does a much, much, much better job as Tris Prior in this sequel. Instead of her usual deadpan expression, she showcases a plethora of emotions, although she does overdo it a bit during one emotional sequence. I'd say that crying isn't one of Shailene's strong suits.

Miles Teller, as the protagonists' frenemy Peter, has grown on me substantially since I first saw him in Divergent. He's an up-and-coming actor who's doing a variety of cinema, from The Spectacular Now to Whiplash to now Insurgent. Peter has always been very unpredictable, and Miles' take on this character is incredible. He is interesting to watch and has the best dialogues of all the characters in this film.

Theo James... I don't know how to review his acting. They haven't given Four much to do, other than performing action stunts and looking attractive. The same goes for Ansel Elgort, who plays Tris' brother Caleb. No spoilers, but I feel like they could have explored his character and his motivations a little more.

Even though Jeanine is the villain of the series, so to speak, she is never given much weightage in the books, since everything is seen from Tris' perspective. In this movie, however, Kate Winslet dominates the screen in almost every scene. As far as acting goes, Kate Winslet is Kate Winslet, so need I say more?

Talking about how good an adaptation Insurgent is... well, as is clear from the trailer, there have been quite a few changes in the movie version of Insurgent. But the funny thing is that despite all the changes made (probably around a hundred pages of the book have just been snipped out of the script), Insurgent remains true to the novel at its core. I left the theatre thinking that as book-to-movie adaptations go, this one wasn't actually that bad.

One thing I'd like to mention is that although the ending might have been written as a cliffhanger of sorts, it actually gives a lot of closure to the audience. Some moviegoers not acquainted with the series may not even realise that two more movies are set to follow Insurgent. Personally, I don't see the need for two movies... but that's a topic of discussion for some other day.

I'm going to go with 3.5 stars out of 5 for The Divergent Series: Insurgent.
Funny, action-packed and more or less true to the essence of the book, most action movie fans will enjoy this one, along with book fans who have an open mind and low expectations.

Here's the trailer for Insurgent. If you've already seen this movie, let me know what you thought of it. Did you like it more or less than Divergent? The comment box wishes to know!

I'll soon be writing a spoiler-filled post about all the specific plot changes I did and didn't like in the movie. Book readers, stay tuned.
Bye-bye, Divergents! :)

PS: This movie released only in 3D/IMAX 3D in my city, but only a part of the movie was great to watch in this format. If you aren't crazy about wearing those oversized, smudged glasses, I'd wouldn't recommend 3D, because some of the darker scenes looked dull and blurry to me.
Posted by Unknown at 19:51