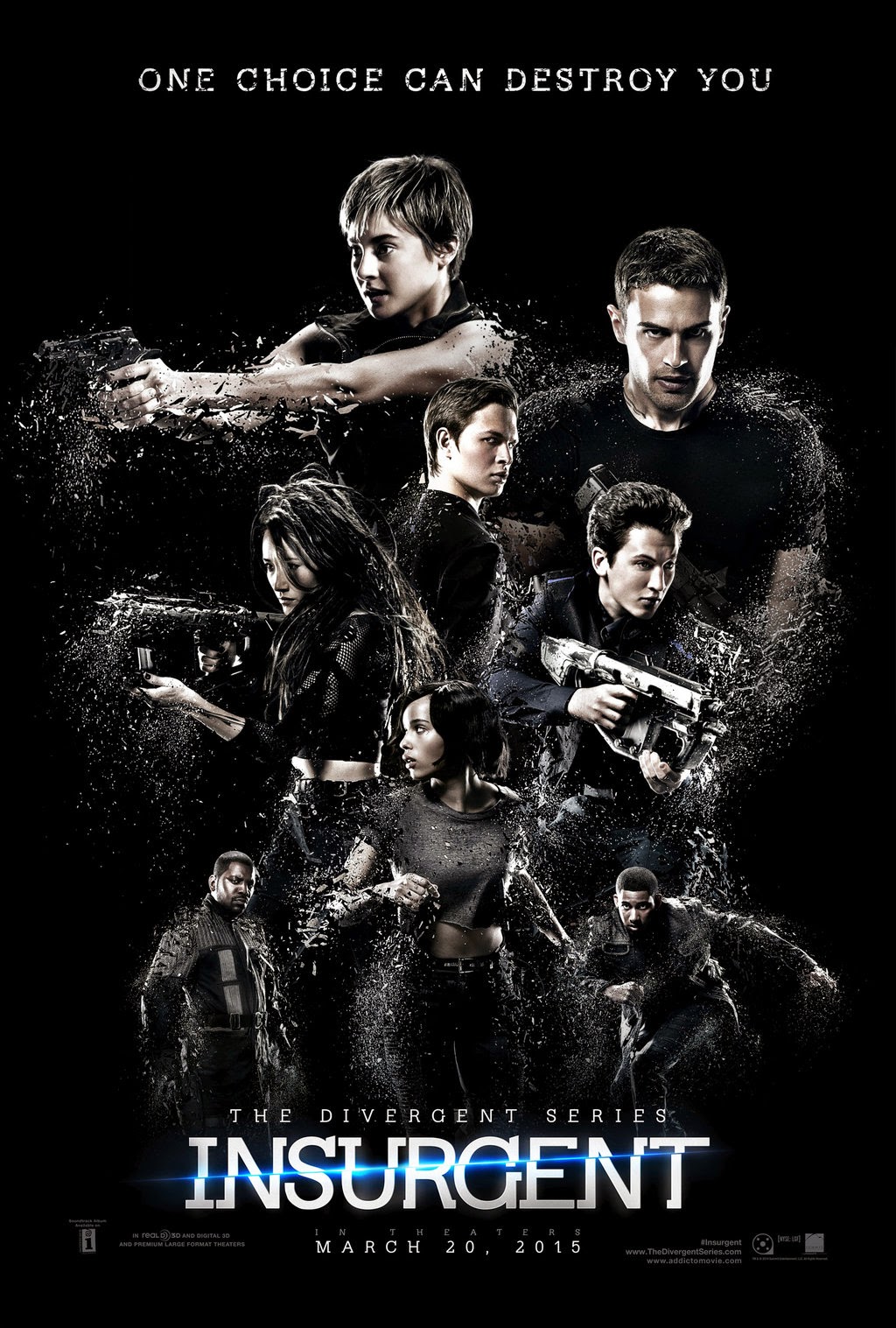 Beatrice Prior must confront her inner demons and continue her fight against a powerful alliance which threatens to tear her society apart with the help from others on her side.

(Off-topic: how cool is that poster?)

This is the first time I'm making a post specifically about all the spoilers in a movie. One of my friends suggested I start spoiler discussions on the blog, because let's face it - spoiler-free reviews can get a little boring for those who've already seen the movie and want to talk about it.

So here's a spoiler warning: If you haven't read the ENTIRE Divergent Trilogy, including the ending of the final book, please do not proceed. Thank you for the views.

I watched Insurgent last Saturday, and despite the many book-to-movie changes, I actually enjoyed it (you can read my review here).
So in today's blog post, I'm going to talk about about some of those changes. Here goes!

1) What's with the Rush?
True to the book, Tris, Tobias (er, I mean Four), Caleb and Peter do seek refuge at Amity headquarters in the beginning of the story, but in the film version, they limit their stay to less than ten minutes, if I'm not mistaken. Tris and Peter's fight is shown, but we don't see Tris high on the peace serum - something I was really, really looking forward to.
Next moment, Eric and his cronies are at Amity, searching for our heroes. Peter betrays them and Tris, Four and Caleb escape to the train.

2) The Mystery Box
We've all been whining about this ever since the second trailer came out. What is up with them introducing this 'box' theory? Jeanine claims that this box, which was retrieved from the wreckage of the Prior household, holds the key to the future of their world. But there's a catch: only a true Divergent can open it. And when I say 'true Divergent', I mean someone who has traits of ALL five factions.

3) 'Tobias'
A major change that occurs towards the end of the first Divergent novel is that Tris finally finds out her boyfriend's real name and starts using it. But here we are, at the second movie, and she's still pretending that Tobias is Four. I understand that the moviemakers don't want to confuse the viewers, but the name-change is what shows that 'Four' loves Tris enough to trust her with his past. Cutting that part out didn't help the love story.

4) The Sex
Okay, I'm from India, so the sex scene (whether PG-13 or not) was cut, that too, in a way that ruined the continuity of the movie. One moment Four is trying to convince Tris not to surrender herself to Jeanine, next moment they're both lying down next to each other, naked, and then Tris stands up and decides to surrender herself to Jeanine.

In the books, the sex didn't happen until Allegiant, and we still aren't sure if that even was sex. Veronica Roth wrote it with a lot of ambiguity so that the readers could interpret it either way.

5) Uriah, Marlene, Lynn, Marcus and Johanna
These are all prominent characters throughout the series, and although the director decided to include them in Insurgent, they're only given about five minutes of screentime each.
Johanna and Marcus' discussions at Amity headquarters are conveniently left out. Marcus only appears in one scene where his son and Tris are spiteful towards him.
Uriah is revealed to be Divergent, but nobody cares because he's a nobody. Marlene does fall to her death while under a simulation, but it has no impact on the viewers because she's a nobody, and Lynn is seen in a few scenes, but she's still mostly a nobody.

6) Tris' Divergence
As we've seen in the novels and the first Divergent movie, Tris shows Divergence for three factions: Abnegation, Dauntless, and Erudite. But in this movie, a device analyses her to be 100% Divergent. Does that mean she could fit into Amity and Candor as well?
And true to that assumption, Tris does pass the simulations for all five factions in order to open the aforementioned box.

7) The Final Fight
So remember how Peter and Four help Tris break out of Erudite headquarters so they can gear up for the final fight showdown where Tris (and Tori) attempt to find Jeanine so they can kill her?
Well, only fifty percent of that happens.
After escaping from Jeanine's clutches, Tris returns to the simulation room to complete her Amity simulation so she can open the box. There is no simulated army, no attack on any headquarters. Tris just opens the box with her 'superpowers'.

8) The Message
The box opens and sure enough, it holds the future the people deserve. Only it's not the future Jeanine expected it to be. The hologram lady (she remains unnamed) explains that this was all an experiment and when the Divergent population increases, the people must go beyond the fence into the new world. Jeanine immediately decides to hide this box and the message from everyone. However, the Factionless and Dauntless storm in and take control of the situation.
We do not find out that the unnamed lady is actually Edith Prior and is related to Tris. I'm not sure if that will be revealed in the next film or if they find it too irrelevant to include.

9) The Ending
The contents of the box are projected everywhere in the city, and all the people of all the factions are shown walking out of their homes towards the fence.
This is in sharp contrast to the novels, where under Evelyn's rule, everyone was prohibited from going outside the city.
In the last few moments of the film, Jeanine is shot to death by Evelyn. The screen fades to black.

Now, here are some things I'd like to discuss with you, dear reader. What did you think of all these changes? Don't you find it weird that Tris is suddenly Divergent for all the factions? Did you also feel like Four didn't have too much to do? Did you also find yourself eager to watch any scene that had Miles Teller (Peter) in it? Oh, that boy is hilarious.
And now that everyone's moving towards the fence, how are the moviemakers planning to adapt Allegiant? I have a feeling it's going to be very different. They might even change the ending and not kill Tris. I personally won't mind if they're liberal with the changes. Allegiant is my least favourite book in the series.

Do you have any more thoughts about this movie? Let me know in the comment section.

I hope you enjoyed the very first Spoiler Discussion! I assure you that there will be many more to come. Bye for now, Geeks! :)
Posted by Unknown at 23:15