'None of the Above' by I.W. Gregorio: A Book Review 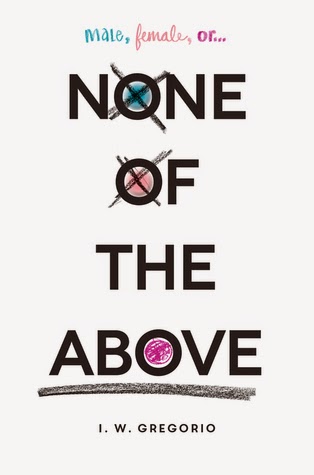 A groundbreaking story about a teenage girl who discovers she was born intersex... and what happens when her secret is revealed to the entire school. Incredibly compelling and sensitively told, None of the Above is a thought-provoking novel that explores what it means to be a boy, a girl, or something in between.

I have to be honest and admit that I didn't know what 'intersex' meant before reading this book. I figured it was the same as being transsexual, even though both are vastly different. So despite being a YA contemporary novel, None of the Above also felt like an educational book - in a good way.
I don't like hugs, but if I did, I'd hug this book.

Anyway, the story revolves around Kristin, a popular teen with a seemingly perfect life: she's Homecoming Queen, with popular friends, a loving boyfriend, and a scholarship to college. In short, she has the life every teenage girl wants.

Or maybe she doesn't.

After Kristin's special night with her boyfriend doesn't go as planned, a trip to the gynaecologist reveals that she's intersex, which means that she has male chromosomes as well as a mix of boy and girl parts, despite looking like a girl from the outside.
And when the entire high school finds out, Kristin has to struggle with this new revelation, and decide whether it changes who she is or not.

I was so invested in this book the entire time. From the first few chapters when Kristin finds out, to the middle of the book, when a trusted friend spills her secret to the school, to the end, when she realises that she can't let bullying stop her from being herself... this book felt like a friend to me.

None of the Above isn't a literary work of art, so the language is what you'd expect from a young adult novel. But there are a few quotes that resonated with me, and I'd like to share them with you:

“If there’s one thing I learned from my dad leaving my mom, it’s that love isn’t a choice. You fall for the person, not their chromosomes.”

I'd been running for so long, trying to escape from who I was. Here in the steady circle of [his] arms, I was finally ready to stand still.

It's difficult to really get people to hate fictional characters, but oh, I hated some of the people in this novel with all my heart. At the same time, there were characters I adored to pieces.
I loved Kristin's character development throughout the story, how she goes from barricading herself inside her room to stepping out of the house with her head held high. I loved the support she had from her father and her aunt, as well as some of her friends. I also really loved the character of Darren, who is quite possibly one of my new book boyfriends.

Towards the end of the novel, I actually burst out crying after a particularly intense scene. I don't even think The Fault in our Stars had that effect on me (the book, not the movie - the movie still makes me cry like a blubbering baby).

I'm going to go with 4 stars out of 5 for None of the Above.
This book is so powerful and raw that you can't help but love it. Not only does it teach you about acceptance, it also tells you that some people may have been in the spotlight all your life - but that doesn't mean they care about you. On the other hand, the people you thought were just background noise can turn out to be the most wonderful friends you'll ever make.

Please, please read this book. Tell your friends about it. Tell everyone you know about it! And if you've already read this book, let me know if you loved it as much as I did. And if it didn't strike a chord with you, are there any similar books you'd recommend?