'Put a Spell on You' by Karen Clarke: A Book Review 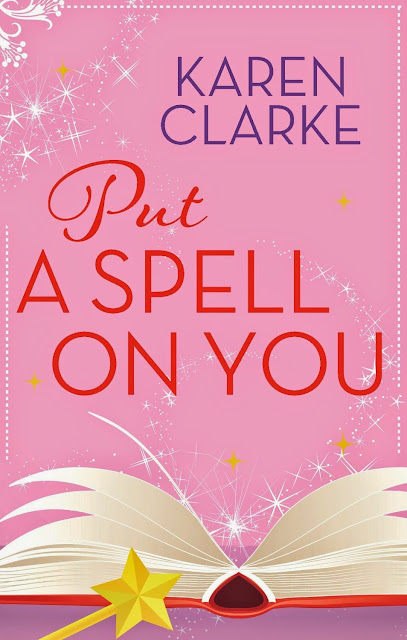 On the eve of her 27th birthday, Josie Goodwin is feeling harassed. Her boyfriend Will has become a donkey-loving hippie and her best friend Lara has baby-brain. She desperately needs to find the perfect location for a film shoot, or her career may implode. Her eccentric grandma has always said that Josie will inherit a book of spells on her birthday, but since she doesn’t believe in magic, nothing will improve; or will it?

NOTE: I received an ARC (advance reader copy) from the publishers via NetGalley in exchange for an honest review.

Hello, dear book Geeks. Today I'm doing something quite different. As the note may have told you, I recently registered at NetGalley, a website where publishers and reviewers can interact and help each other out. The publishers get a review of the book before it's gone for printing, and I get to read books for free. What could be better?

Anyway, today I'm reviewing a British chick lit novel with a dash of fantasy in it for good measure. Put a Spell on You is very reminiscent of Sophie Kinsella's novels, although that may be because chick lit is a very, very clichéd genre.

So the protagonist of this novel, Josephine 'Josie' Goodwin comes from a generation of witches. Her grandmother was one, and now, on her 27th birthday, it's time for her to come into her magic. But there's a small catch - her powers will only last for nine days, and she only gets to cast nine spells.
Josie doesn't mind, though. Nine spells are more than enough for her. So, on a whim, she hurriedly casts all nine spells within the first few days of receiving her spell book without reading the fine print.

The fine print? Space out all your spells... or else.

Now Josie's life, instead of improving, has taken a turn for the worse. Her spells are all jumbled up, some of them haven't even worked, and because she's cast all nine spells, she has no way of reversing them... or does she? With the help of her wise grandmother and a friendly neighbourhood witch, maybe Josie can make things go back to the way they were. Maybe.

See, the thing with this novel - and possibly all of chick lit - is that it relies very heavily on exaggeration. Nothing is subdued. All the characters are stereotypic and, to an extent, annoying. I personally didn't like Josie's character at all. I know I'd probably become really manipulative if I had nine spells on hand, too, but even without the magic aspect of it all, she didn't seem like a person I'd befriend.

The writing was typical chick lit. Casual style of writing, with some laugh-out-loud moments and even more cringe-worthy moments. And even though the characters - and some of the situations - were annoying, I was still really entertained. And although I wouldn't read this book a second time, I can say that I don't regret reading it the first time.
Also, it gave me something to add to my gratitude list: I am so grateful I am not Josie Goodwin.

I'm going to go with 3 stars out of 5 for this one.
Put a Spell on You makes for a good summer read and, if you're anything like me, will make you think and talk in a British accent for a few days afterwards. I'd recommend it for chick lit lovers and especially for fans of Sophie Kinsella (mostly because I don't actually know any other chick lit authors).

Put a Spell on You releases on June 4th, 2015. Do let me know if you plan to give this book a try. And if you've managed to get your hands on the ARC, what did you think? How would you use your nine magic spells?

I have many, many more ARCs to read and review, so be prepared for the Ultimate Season of Book Reviews!
I'll see you next time. Bye, Geeks!