'Remember Me (Find Me, #2)' by Romily Bernard: A Book Review 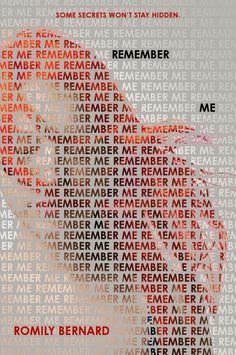 "Remember Me."
These are the words carved on the dead body of a local judge's assistant... the same local judge who sarcastic teen hacker, Wick Tate, is investigating as part of her undercover hacking for her not-exactly-favourite cop, Detective Carson.
In this edge-of-your-seat thrilling sequel to Find Me, Wick had thought her troubles were over. But she should've known better. Now she is once again dealing with criminals and corrupt cops... and a brooding new love interest. The pressure might be too much, as secrets - including Wick's own - climb to the surface. Will Wick persevere like she has before?

Last year, I reviewed a YA murder mystery that didn't quite live up to my expectations.
I just finished reading the sequel, about forty-five minutes past midnight, and... I just had to start writing this review!

After the incidents of Find Me, Wick Tate, her sister and her new mom are now very well-known around town... for all the bad reasons. Between juggling her boyfriend Griff, memories of her almost-death and trying to convince her foster mom that she's okay, Wick is a mess.

And things only get worse when, on a mission for Detective Carson, she comes face-to-face with a dead body. At a public event.
Curiosity - and some blackmailing by Carson - gets the better of her, and she sets out to investigate this mystery. The only problem is... the killer is on to her. And her family. And he's getting closer.

Romily Bernard isn't the best at writing romances. Wick's blossoming relationship with Griff didn't convince me in the first novel, and although I like Griff a fair amount now, I just don't see any chemistry between them.
And that's probably why Romily wrote Milo, the flirty new hacker, into the picture.

Look, love triangles are too common in YA novels these days. You might even say they're overdone. But with Remember Me, I didn't mind one bit. In fact, I actually prefer Milo to Griff when it comes to chemistry and sexual tension.

As for the mystery... can I come right out and say it? I was almost completely clueless. I had some doubts about a suspect, then I decided that some other person was the killer, then I figured out the motive... and then I had the rug pulled out from under me. Because it turned out that the person I'd thought was the killer was innocent (not to mention dead), and the first one I'd suspected was the killer.

This is why it's important to go with your first instinct, Geeks. This is why.

But the motive for murder didn't convince me. I'm sorry, but I think I preferred Find Me's mystery to this one. Although its killer had been fairly obvious, I had still loved the reveal. And the ending had been absolutely brilliant!
With Remember Me, however, it was the middle and the penultimate few chapters that grabbed my attention. I wasn't scared out of my wits during the climax, but I was terrified during Wick's breaking-and-entering missions, so scared that I actually heard noises inside my own house while I was reading.

The writing has definitely improved since Find Me. Here's a snippet that I particularly liked:

We're surrounded by darkness. Sometimes it's everyday evil. Maybe it's the guy who beats his wife or cheats on his taxes or belittles his kids, but he still considers himself a good person. It's still a talent most of us have, telling ourselves we're good when we're not.
Then you have evil like (spoiler) or (spoiler), evil that shows us just how breakable we all are, and how much our safety depends on everyone playing along.
Until someone doesn't.

And might I add that this sequel ends on a cliffhanger? The sequel to this sequel, Trust Me, comes out in 2016. You can bet I'll be eagerly waiting.

I'm going to go with 4 stars out of 5 for this one.
To conclude, Remember Me weaves a delightful and conflict-driven tale when it comes to characters and relationships, with some terrifying, edge-of-your-seat action, but doesn't completely satisfy you with the reveal of the mystery.

Still, I'd recommend this to all fans of YA mysteries, especially if you read and liked Find Me. The sequel is a much, much better improvement.

Have any of you already devoured this book? Let me know what your thoughts were. Are you as excited for the third book as I am? The comment box awaits your response.

See you around, Geeks!

PS: If you haven't already, read my first young adult romance, I Hate You... Like I Love You! for free right here.
Posted by Unknown at 01:47