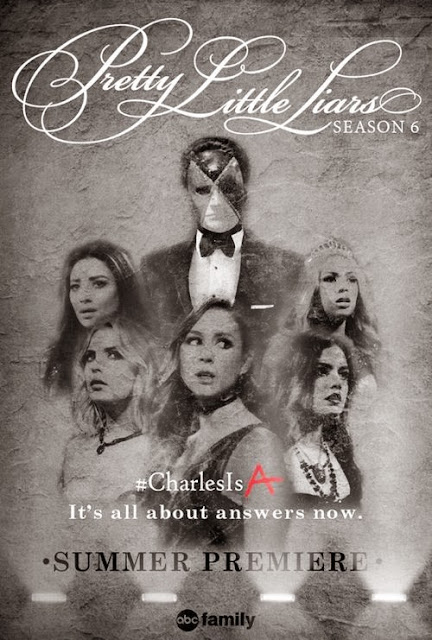 Aria, Emily, Hanna, Spencer and Mona are trapped outside of Charles' dollhouse with nowhere to go and must now deal with an angry tormentor. As the girls struggle to survive, the puzzle of Charles' story begins to come together.

And finally, here we are. Feels like just yesterday when the fifth season of Pretty Little Liars ended on a massive cliffhanger, but now the first episode of season six has passed us by and given us a lot more to think - and obsess - about.

The season premiere starts with the Liars (and Mona) stuck outside the dollhouse, come rain or shine, with no escape. But Charles' temper is short-lived, because he soon lets them back into the game... only to gas the Liars. They wake up a few hours later in a room that resembles a morgue.
Mona walks in, dressed as Alison, acting as though the game never ended. The girls are sent to their room, where a 'surprise' awaits them. The moment their doors close, they all cry out in pain or fear. What's going on?

That's not the only surprise, though. We see another girl hiding in the shadows, a blonde girl in a yellow top. Could that be Bethany Young?

Back in Rosewood, we find out that the Liars have been missing for almost a month now, and Alison's sentence has been overturned. At a press release, she pleads Andrew, the main suspect behind this spectacle, to leave the girls alone. "They are my rock," she says, "and without them, I would be lost in the woods. All alone."

Detective Tanner's still trying very hard to prove that she isn't useless. Alison has been given 24-hour security, although that fact is being kept secret from the media. The police are hoping that Andrew will make an attempt to 'collect' Alison, and when he does, he'll be the one getting collected.

But Ali has her own plans. She's hoping to lure A to the kissing rock with the help of Ezra, Caleb and Toby, away from the watchful eyes of Tanner. At the kissing rock, Alison finds a car waiting to be driven to the dollhouse. She gets in.

Meanwhile, the Liars seem to have gone back in time - not literally. Aria's punky pink hair is back, as are Spencer's preppy sweaters and Emily's swim gear. They're sent to Alison's room to prepare for her 'arrival'. Looks like Charles is definitely expecting the real Ali to make an appearance.

Where's Mona, though?
Since Charles no longer needs an Ali stand-in, Mona is being held hostage in a deep pit, with only her music to comfort her. She's sure that Charles is going to kill her.

The Liars have had enough, though. They find a secret entrance into Charles' 'vault' and discover his secret stash of memories. Dolls, baby clothes, home videos... yes, Charles is definitely a DiLaurentis.

As Alison makes her way towards the dollhouse, the Liars threaten Charles: leave them alone or they burn his 'soul'.

Charles takes the bait. He switches on the fire alarm, forgetting Ali's proximity to his lair, and the Liars (with Mona in tow) try to find a way out. Alison, Ezra and Caleb find the entrance to the dollhouse and get the girls out. The police arrive in time to realise that there's a sixth girl inside... a girl named Sara Harvey.

I can't believe the creators started the #SummerOfAnswers without any answers. If anything, we now have more questions. Why has Andrew gone missing? We know the police suspect him because his 'diary' reveals his obsession with the girls, but the real question is this: who planted that diary?

As for Sara Harvey, she went missing years ago! Has she been living in the dollhouse all this time?

But that isn't possible, because Mona was the first A, and she knew nothing about this lair. What's going on?

We're finally seeing Alison in a positive light. I somehow doubt that's going to last. Alison is the cause for all this drama, after all.

Last episode, Spencer was in the same room as Charles, and she tells the Liars that he seemed familiar, somehow. Like 'a cousin' or someone you knew when you were little. That's another clue. Charles is clearly Jason's estranged brother!
A lot of people think Wren is Charles, but if that's true, then Melissa was going to marry a member of her family, a member who also made out with Spencer. That's just... ick.

Did anyone else think Ezra was giving off a really creepy vibe this episode? Maybe it's his beard that's making him look like the bad guy, but I somehow don't trust him. I have a feeling Ezra could be in cahoots with Charles, whoever that is.
Or maybe Ezra's acting was just off today...

Anyway, this episode was incredible. I was glued to the screen for every single minute. And considering the degrading quality of PLL over the years, that's saying something.
I can't wait for next week. The promo seems exciting... I wonder when we'll find out who Charles is. I hope it's worth the wait.

Did you enjoy this season premiere? What are your 'A' theories? Did you also miss Andrew's handsome face?