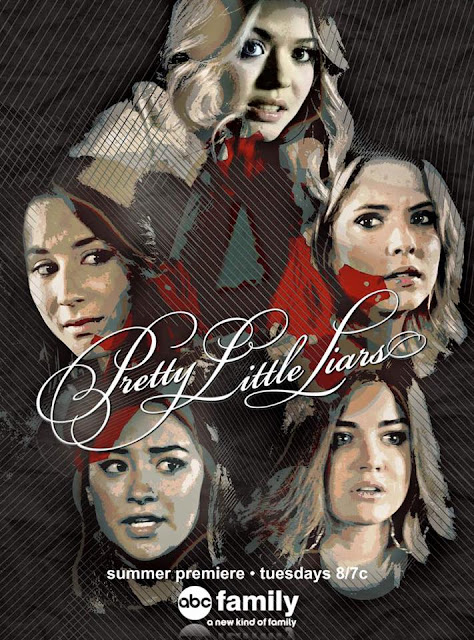 The girls may have gotten out of the Dollhouse, but what happened to them during their time of captivity has lasting effects. With worried loved ones watching over them, the PLLs are home and trying to heal, with not much success. Even with suspected tormentor Andrew in custody, Aria, Emily, Hanna and Spencer fear they are far from safe.
Meanwhile, Alison must deal with her past indiscretions and her notoriety around Rosewood.

Okay, it's official: season six is churning out some of the best episodes in a very, very long time. We may not have got a lot of answers this episode (or the last one), but this episode was still incredibly engaging.

For the first time in forever, instead of focusing on the 'A' mystery storyline, Songs of Innocence lets us into the psyche of the girs and how they cope with the trauma they've been through. Wonderful.

The episode opens with the girls recovering in a hospital, talking about the man behind the mask: suspect Andrew Campbell. Some of the girls aren't sure if it could really be him, but Aria is adamant. Why else would that sick freak get so close to her family? In any case, they decide not to tell the cops anything about Charles. Let them figure it out all on their own.

Before leaving the hospital, Emily checks in on Sara Harvey. Distraught and depressed, Sara admits that she had been in that hellhole for over two years. But she isn't open to Emily's probing about Charles. After all, she's been through a lot.

Alison finally asks her father about Charles DiLaurentis, but in vain. He's quick to tell her no such boy exists. But can Ali believe him?

Back home, the four Liars still find themselves trapped in the dollhouse. Wherever they go, no matter what they do, the memories of their time in that place continue to haunt them. Terrified, each Liars tries to deal with her problems in a different way.

Spencer goes right back into Detective Hastings mode, convincing Alison that her father is a liar. She also lashes out against her mother for taking away her anti-anxiety medication. Veronica Hastings is worried she will relapse, but Spencer is adamant. She needs those pills.
And so, when she's alone in Aria's bedroom, she steals one. Way to go, Spence.

Emily is truly the daughter of a military man. Sporting his army jackets and stealing his guns, she makes her way to the firing range in spite of her mother's warnings. But the firing range only brings back memories of what Charles made the girls do...

We discover that Charles, inspired by Milgram's Experiment, forced the girls to electrocute each other. Pick one, the voice said, or everyone gets hurt. He made the girls turn against each other in the worst way possible.

And that's why Hanna can't bring herself to face the girls again. In fact, she can't even face herself in her own bedroom. With help from her mother and Caleb, she decides to redesign and renovate her entire room. She wants to tear it all down and start afresh.

Aria messes up the most, though. First she shouts at Ezra for trying to help her pen down her thoughts, and then she gives a false eyewitness testimony.
Now that Andrew Campbell is finally behind bars, she goes to the police station with her mom and claims to have seen the suspect's face in the dollhouse, even though we all know she didn't. Thankfully, the police don't seem to believe her.

And Alison? The blue-eyed blonde returns to church, making a new friend along the way: new cop Lorenzo. He seems to be a good-natured fellow, and he definitely likes Alison, considering the fact that he was making googly eyes at her, but he's a Rosewood cop. Can we trust him?

As the episode comes to an end, we find Sara Harvey lurking outside Emily's house. In typical Sara Harvey fashion, she ran away from home because she was guilty of ruining her mother's life. She also admits to Emily that she does not think the police have caught the right guy. And since she was in there longer than any of them, maybe the Liars ought to trust her instinct...

I could not possibly imagine what the girls went through. Granted, I don't have or want as many friends as they have, but I could never pick which one gets a free pass and which one gets fried!
And Sara Harvey was there for more than two years... how can that be, if Charles only became 'Big A' recently? Or has he been calling the shots all along, even with Mona?
And why was Aria wearing a top that said 'BARF' on it?

Speaking of the first 'A', where was Mona this episode? The Liars mentioned that she was in the hospital along with them, but why don't we get to see how she's dealing with this mess? After all, Mona's ordeal was far worse than the Liars'.

I can't believe Spencer's drug addiction storyline is making a reentry. No offence, writers, but I'm a little tired of it.
And I thought Toby was leaving the police force? And where was Detective Tanner?

Not Andrew, obviously. Ezra made a very short appearance this episode, so I couldn't tell if he was still being creepy or not.
Did any of you think Alison and Toby's conversation outside the police station sounded a little... suspicious? Maybe my mind is just going into overdrive what with all the mystery, but I have a feeling there's more going on behind the scenes than we know.

Next episode's promo looks exciting. Looks like Jason remembers something about 'Charlie'.


What are your 'A' theories? I've been rewatching from the very beginning, and I agree with the many viewers who believe Wren is Charles. Let me know in the comments below: what's your favourite 'A' theory?