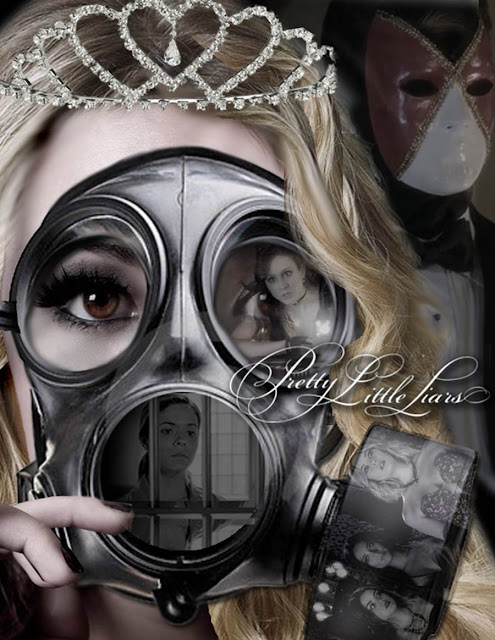 The girls’ lives have been turned upside down by their captivity and each one of them is looking for answers to make sense of their ordeal. Aria focuses on Andrew by trying to figure out who this boy really is while Emily tries to connect with a new friend. In true Spencer fashion, she is on a mission to get answers about Charles from Ali and Jason. Hanna wants to bring the four friends back together so they can move past what happened in the Dollhouse.
Meanwhile, Alison is no longer the queen bee/mean girl she once was – but who is she now? A new friend tries to help her find the courage to start anew and find the 'new' Alison.

So last week's episode took a break from all the sleuthing, but in Songs of Experience, the girls - led by Aria - don their detective caps and get right down to business.

Well, it's supposed to be the girls' first day back at school, but of course they all have their excuses. The super-creepy Sara is still at Emily's house, and of course she can't be left alone. Spencer has to be the support system for Alison, who believes (quite correctly) that this entire Charles shenanigan is all because of her. Aria just isn't ready yet, and Hanna... well, she's the only one who still wants to get her diploma, apparently.

Dr. Sullivan, who's now counselling at Rosewood High, suggests that Hanna come see her at her office later. But Hanna is tired of being alone. No matter what happened in the Dollhouse, she misses her friends, and she wants them talking about their trauma together.

Meanwhile, Lorenzo is showing off his soccer skills as a youth leader, and wants Alison to volunteer, because she's got the "moves". But Ali knows that she has a reputation in this town, and there's no way any sane parent would let her be a guide for young girls. Lorenzo's quick to assure her that he's got her back.
Toby returns as Rosewood's New Creepy Cop as he sips coffee and watches the duo get their flirt on.

As much as Aria tries to get her mind off what happened, she can't help but wonder who Andrew really is, and why he did what he did. After some sleuthing, she and Ezra discover that Andrew's adopted. Could he really be Charles?

At the emergency Sullivan meeting, Spencer storms in and announces that she's spoken to Jason about Charles 'Charlie' DiLaurentis, his imaginary friend when he was little. This imaginary friend had to leave one day, though, because his father said so.
But the boy in the home movies and the man in the Dollhouse certainly weren't imaginary. What's Daddy DiLaurentis hiding?

Just when you think the girls are finally doing something sensible and talking about their traumatic experiences, Emily gets a FaceTime notification from Sara, who was given one of Caleb's extra phones just in case. Turns out Sara's taking a nap, but Charles isn't. He's got a knife to her throat and doesn't plan on leaving unless the girls head out of Sullivan's office immediately. Tsk, tsk.

Sara's alive and kicking, although still unnervingly terrifying, but there is some bad news in store for the girls anyway. Andrew Campbell is being released in a few hours. He has an alibi for all the non-murders and the cops have nowhere enough evidence to build a case against him. So if he was still in jail when the girls were being blackmailed, Charles is clearly still out there.

After some more sleuthing, Aria finds a photograph of Mrs. D, Jason and Charles in the DiLaurentis household. There's no way this kid is imaginary.

As the girls are returning home, Hanna finally comes clean about what 'A' made her do, and is surprised when she finds out that all the other girls has to play the shock therapy game, too... except there were no shocks, other than the psychological kind. Charles was just messing with their heads.
Then they see Andrew walking out of jail. He accuses the girls of betraying him when all he had done was try to find them. "Other towns have toxic dumps," he says angrily. "Rosewood has you." Ouch.

The episode ends on a cliffhanger. Jason and Alison confront their dad about their missing family member, but, in typical PLL fashion, we don't get to hear the answers. All we see as the camera zooms out is Charles, dressed in his 'A'-gear, spying on his long-lost relatives.

Why do they have to make us wait an entire week to find out what Mr. D has to say? Why?

And seriously, Toby ought to have taken off that police uniform by now. It's turning him into a moron. Did he seriously try to get Spencer to cockblock Alison and Lorenzo?

I had almost thought they were going nowhere with the Spencer-is-a-Druggie storyline, but we do see her popping a pill towards the end. Maybe she'll get crazy enough to return to Radley and find out more about Charles.

Am I the only one, or do you think the writers are trying to make Emily and Sara happen? I really, really, really hope not. I have a really strong feeling she's Charles' minion or that she's in love with him or something of that sort. And can Emily ever just be single? For once? Can for once she just be single?

I found it a bit odd that Mr. DiLaurentis blamed Jason for everything that's been happening. Sure, he's not going to win 'Son of the Year' any time soon, but why be so angry, Mr. D? Why?

Aria's the only Liar who's always staring at mirrors. I still think she could have a dual personality. She's the most volatile of them all.

Charlie. Duh.
But Sara's plenty suspicious too. As is Toby. I don't like you anymore, Toby.

Anyway, here's next week's promo. We'll find out more about the gAmes played in the Dollhouse, and how the girls might have done some serious damage to each other even without the shock therapy. Looks like Daddy DiLaurentis tells his kids how he met Charles. Except that it's still not the real story. Sigh.

Anyway, who was on your 'A'-dar this week? What did you think about this week's episode? I can't wait to discuss everything with my PLL Geeks.
I'll see you next week, same time, same place. Au revoir!
Posted by Unknown at 11:10