'A Geek Girl's Guide to Murder' by Julie Anne Lindsey: A Book Review 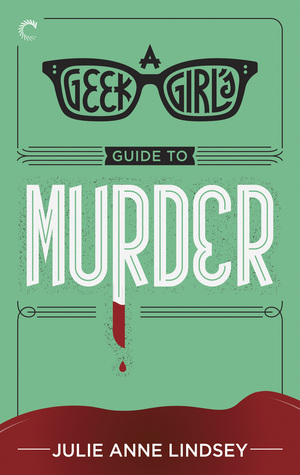 IT manager Mia Connors is up to her tortoiseshell glasses in technical drama when a glitch in the Horseshoe Falls email system disrupts security and sends errant messages to residents of the gated community. The snafu’s timing couldn’t be worse—Renaissance Faire season is in full swing and Mia’s family’s business relies on her presence.
Mia doesn’t have time to hunt down a computer hacker. Her best friend has disappeared, and she finds another of her friends murdered—in her office. When the hunky new head of Horseshoe Falls security identifies Mia as the prime suspect, her anxiety level registers on the Richter scale.
Eager to clear her name, Mia moves into action to locate her missing buddy and find out who killed their friend. But her quick tongue gets her into trouble with more than the new head of security. When Mia begins receiving threats, the killer makes it clear that he's closer than she’d ever imagined.

Note: I received an advance reader copy from the publishers via Netgalley in exchange for an honest review.

As you may have guessed, the title of this book was what caught my eye. I pride myself on being a geek, and I adore murder myseries. I'd make a fantastic detective.
So I was really looking forward to a nice thriller about a geekie chick who solves the mystery of her friend's death.

The thing with this book is that in spite of the engaging title, it doesn't actually focus on the murder aspect that much.
Mia Connors is a self-professed geek, from her designation to her hobbies to her family business, and she has had her share of problems. And of course, things get worse one of her friends turns up dead.

Now, if I ever found one of my pals dead in my office, this would be my reaction.

What was Mia's reaction, you ask?

Where was the human element to this story? One of her closest friends is no more. Her best friend is missing - missing! She's the prime suspect in a murder investigation. Where are her feelings? Why isn't she recovering from trauma? Why is she still acting like everything is rosy and blissful?

The story focuses more on Mia's day-to-day life and the email glitch instead of the murder, and that bothered me.

That being said, in spite of the slow pace of the novel, I loved the dialogues and the descriptive way in which it was written. This book is one of those light-hearted mysteries, so there's a lot of humour. A lot of geek humour, to be precise.

"We sound like the makings of a limerick or a dirty joke. A detective, a security guy and a geek walk into a bar."

The subplots were interesting. Mia and the security head's banter was so enjoyable to read. Their chemistry was palpable, and I couldn't wait for the romance to begin!
No spoilers, but... that did not turn out the way I expected it to. Which is okay, because there's going to be a sequel (A Geek Girl's Guide to Arsenic), and I suppose all those dangling subplots will be developed then.

As for the ending, and the murder mystery reveal... damn! I had not seen that one coming until the last couple of chapters. Unfortunately, I realised who the killer was right before I had to leave for college, so I had to spend four hours barely able to comprehend the how and the why until I could come home and finish reading in peace.

I'm going to go with 3 stars out of 5 for this one.
A Geek Girl's Guide to Murder is witty, entertaining and full of well-developed characters, but it misses the mark when it comes to the actual murder mystery.
I'm very partial to books that have sequels, so I will definitely look forward to Spring 2016, when I can finally figure out what the hell happens with Jake and Mia and Nate and everybody else!

A Geek Girl's Guide to Murder will be available as an ebook on August 31st, 2015. If you're a sucker for books that are more funny than thrilling, pick this one up.

Which book are you currently reading, Geeks? Right now, I'm enjoying Mansfield Park, Fortnight Before Dawn and The Power of Positive Thinking, all of which I will be reviewing as and when I'm done with them.
Have a great weekend!
Posted by Unknown at 16:26