'Fortnight Before Dawn' by Bhamini Ravishankar: A Book Review 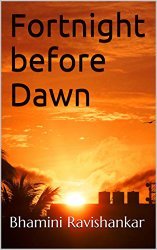 Terror attack, Catastrophe, Eviction – all hinging on just one thing: the decryption of an impenetrable code being used by a foreign terror organization to co-ordinate a large-scale terror attack in Bangalore, India on the first of January, 2015.
Desperate to outrun time and avert the attack, the DXA—a specialized anti-terror division of the Indian Intelligence Services—holds a gun, literally, to Avanti’s head to get her to crack the code. Desperate to escape a darkly painful past and a dreadfully messy present, she is left with no other choice but to comply. But does the near-linguist Avanti—born and bred in Cameroon, Africa, and eking out a living by teaching French in Bangalore— have it in her to render the astonishing services being demanded of her?
A tale of how an ordinary life turns extraordinary in the span of one fraught fortnight – that fortnight before dawn. The tale with a scorpion’s sting in its tail...

Note: I received a free copy of this book from the author in exchange for an honest review.

As much as I love humour and romance, I must admit that mystery, crime and terrorism are a weakness of mine, especially when it's a story about a linguist living in my hometown. Yes, Fortnight Before Dawn is about a woman of Indian origin who speaks several languages, resides in Bangalore and teaches French at an institute.

However, her life isn't completely rosy. She's an orphan, soon to be evicted unless she works her way out of her debt trap, and there is no room for luxury - or love - in her life.
When an officer from the DXA recruits her to crack an impenetrable terrorist code, she sees a ray of hope in the darkness of her life.
But Avanti has secrets of her own, and it's only a matter of time before her life is on the line.

The story has a rather weak start. There's an information dump of sorts about Avanti's childhood, her family history, and her love life that seems irrelevant to the story. Add to that the long-drawn sentences, wordy, old-fashioned dialogue and insane figures of speech, and it can be a little tiring to leaf through page after page. Here are some examples to show you what I mean:

The day had not warmed up yet despite the midday sun shining high in the sky, its rays filtering in through the overarching raintree branches that resembled giant florets of broccoli to paint a chiaroscuro of darkly bobbing monsters on the grey asphalted street.

The job fitted the free-spirited Avanti like a glove, liberating her from the tedium of enduring endless hours within the four anesthesizing walls of a school room while giving her gregarious nature wings to soar in the neverending azure of the amaranthine African skies.

But once the investigation begins, those tiny nuisances are barely even discernible. The author has a knack of weaving the mystery together, bit-by-bit, in a way that makes it really difficult to put the book down and get on with life.

Another thing I loved about the book - something that not everyone might appreciate - are the frequent dialogues in French and (once) Kannada. They aren't relevant to the plot, so don't worry about missing out on any crucial information.

The writing style is very beautiful, and although there is an abundance of metaphors, similes and adjectives, some quotes do stand out on their own without seeming pretentious or wordy.

How fresh and quiet and orderly everything was, as if the chaos of yesterday had been swept clean in the night and put away like toys and playthings in a nursery.

Until 'Operation Samrakshan' was over, rest would be that acquaintance one crossed on busy roads and barely acknowledged.

A war that was still on, he reminded himself; a war where the death of one mastermind gave rise to the resurrection of ten more.

The story is told from the perspective of different characters: from Avanti to Ranjit (the DXA officer) to the terrorists, this book offers the reader a chance to delve into the minds of every single significant character. I did feel, in the beginning, that this was a very unorthodox approach that beginner authors should not adopt, but everything is justified by the end of the novel, and you realise that this book could not be written from a single perspective.

The last act of the book is a complete game-changer! All of a sudden, the entire mystery, the entire crime is turned over to reveal one of the biggest plot twists I've ever read. Seriously, I did not see that ending coming.

I'm going to go with 4 stars out of 5 for this one.
Fortnight Before Dawn is action-packed, unputdownable and well-written, and though it does have its flaws, as do the books of any first-time author, it comes around in the end. Don't miss out on this one.

You can find this ebook on Amazon here. Have you read it already? What was your reaction to that major plot twist? Do tell me in the comments below.

If you have any book recommendations, get in touch with me. I'm always in the mood for new books.
See you next time, book Geeks!