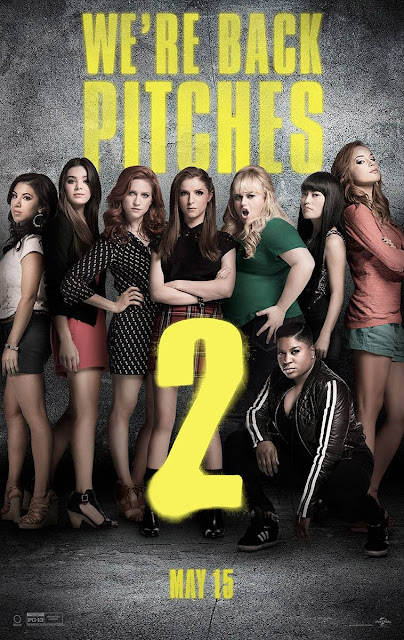 After a humiliating command performance at Lincoln Center, the Barden Bellas enter an international competition that no American group has ever won in order to regain their status and right to perform.

I wasn't even aware that Pitch Perfect 2 was going to release in India. I had gone to the theatre because it's right next to the bookstore (yes, life is beautiful) and when I saw the movie schedules, my first reaction was:

Anyway, I'd seen the first Pitch Perfect movie a few months ago, and while I didn't love it, I liked the corny jokes, the song covers, the college setting, and most of all, Fat Amy. Fat Amy is life.

The Barden Bellas have become famous after winning the collegiate championships several years in a row (as famous as a capella singers can get, really), and have the honour of singing for President Obama on his birthday.
A wardrobe malfunction leads to the Bellas losing out on their championship status, as well as the possibility of having to disband the a capella group forever. But maybe if they win the international competition - a feat no American group has ever accomplished - they might have a shot at being reinstated.

The events of this movie happen a few years after the first one. It's the Bellas' final year in college, and after becoming a nationwide disgrace, they have to learn to move on from a capella and see what the future holds for them.

Beca is now secretly interning at a record company. Chloe, who I think was a senior in the first movie as well, has been failing her exams intentionally in order to remain a Bella. Fat Amy and Bumper have struck up a friends-with-benefits situation, and there's a new girl on campus, the daughter of a former Bella, who catches the eye of geeky magician Benji.


The main problem with Pitch Perfect 2 is that in spite of having so, so many subplots, there still isn't much that drives the story forward. The movie feels drawn-out and drags at several points, and although it's refreshing to see more complex friendships and relationships, the main plot line is almost non-existent. Another problem is that the movie ends on a sweeter-than-sugar note topped with a big red ribbon.

In contrast to what most critics said, I found this movie to be a little more entertaining than the former, probably because Fat Amy's character has a much bigger role. The collegiate a capella hosts are also given more footage, and a lot of their jokes are intentionally sexist or racist. That may or may not be the kind of humour you enjoy.

The music is incredible! An original piece is featured in the movie, called Flashlight, and I am absolutely in love with that song. A variety of popular a capella stars play cameos in the movie, and that only makes the music feel more alive and engaging. In this regard, the sequel outshines the original.

So although this movie is in no way as good as the original, although there really was no need for a sequel, although I did not approve of some of the new main characters, I still had a really good time laughing and smiling and even getting emotional towards the ending.
(Then again, I get emotional at the end of every movie. Never mind.)

I'm going to go with 3 stars out of 5 for this one.
Pitch Perfect 2 is rowdy, unoriginal and somehow slow and rushed simultaneously, but it is also packed with quite a few laugh-out-loud moments and heartwarming music. Go watch this movie if you're bored and in dire need of cheese popcorn.

Have you seen Pitch Perfect 2, Geeks? How did you like it? Be sure to let me know in the comments below.