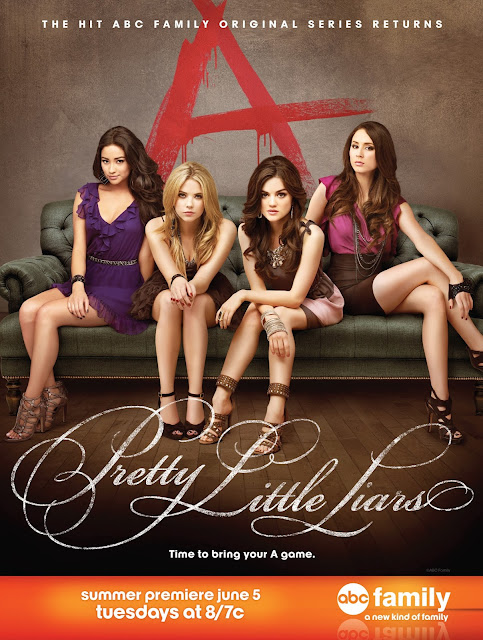 Mona returns to Rosewood in a very fragile state as she must answer to the police for faking her death. Matters only get worse when she is confronted by Lesli about her inadvertent involvement in Mona’s plot. Hanna is determined to help Mona out, not only to reassure her she is safe from Alison but also to try and repair Mona’s friendship with Lesli. Emily tries to help Sara with her troubled home life by encouraging her to explore the possibility of emancipation. Spencer, on the other hand, finds help from someone from her past.
Meanwhile, Alison grows closer to Lorenzo as she looks for support outside of her family.

I'll be upfront and admit that this was the first season 6 episode that I didn't like. The teasing and the speculation and the red herrings were fun until now, but... it's been five weeks. We need some actual answers!

The episode starts with Spencer walking through the catacombs of Charles' Lair, as she follows a zombie ballerina dancing her way to death. Despite Spencer's probing, the girl does not speak, and it's revealed (obviously) that this was a nightmare.

But Spencer still thinks this dream has some significance. There was someone's blood all over her in the Dollhouse. Maybe she really did hurt this child. But who is she? And what room was she in?

Mona's back in Rosewood, and it looks like she got some style inspiration from Jenna. What's with the black shades? She's terrified that the cops will come for her after her stint as a dead human, and things get even worse when she comes face-to-face with her old friend Lesli, who blames Mona for faking her death and getting her into trouble. She also calls Hanna a 'bag of hair', which isn't very relevant to the plot, but definitely needs mentioning.

In the mean time, Aria and Clark are getting along like a house on fire. He tells her about some photography competition that could lead to an internship in sunny LA, and that definitely piques Aria's interest.
But she isn't interested enough to date Clark, and when he asks her out to dinner, she turns him down.
When they go out of town to shoot at an old junkyard of sorts, Aria realises that she's still being followed... and her new friend may have inadvertently caught 'A' in the act with his camera.

Spencer's getting by with the help of those pot cookies, but maybe that's not what she really needs. She drops in on an Addicts Anonymous meeting and runs into Dean, her former sobriety coach who tells her she can always count on him to help her out.

Alison's reputation is still in the grey area when it comes to Rosewood residents and cops, and she isn't sure if she'd be accepted at church camp, but Lorenzo promises her that nobody had any major issues with the idea. He also asks to send over a different cop guard to her place after one of them disses her, and the two of them share a sweet kiss on Ali's front porch.

Unfortunately, Mr. DiLaurentis spots them, and judging by his expression, he's batshit furious.

Sara, still a guest at the Fields household, finds out that her alcoholic mother wants her to come back, probably so she can make a few bucks out of this sensational situation. Emily urges Sara to seek legal emancipation, which Caleb (who apparently runs his own web design company) is glad to help them with. He also offers Sara a job even though he has no idea if she's capable.
With the emancipation in process, Sara and Emily decide to celebrate her freedom by getting deep, metaphoric tattoos.

And that's when Aria sends them a text, telling them what she's discovered. She grabbed Clark's negatives, and the Liars finally have proof: judging by A's silhouette, Charles is a she.

Spencer and Hanna have made their own discoveries at Radley: Charles really is dead, the room that Spencer dreamt of is in the mental hospital, and Lesli was a patient there and knew not just Mona and Charles, but also Bethany Young.

Everything seems to fit into place: a young woman stalking them, a woman who has an agenda, who hates them with all her heart and isn't willing to let them go: it has to be Lesli.

As the episode comes to a close, we see Mona on the phone with the newest 'A' suspect, apologising profusely. Looks like they're both working together... and Lesli isn't happy about Mona slipping up and letting the girls find her Radley records.

The episode's 'A' sneak peek shows the crazy stalker making his very own Aria doll and combing its hair. Creepy, indeed.

So are they all getting new love interests now? Well, except Caleb and Hanna. Then again, they're the only decent couple on the show.
I actually like Clark. He's around Aria's age, he's funny, they share similar interests, and he never tried to spy on her to further his writing career. Dump Ezra and go after this one, Aria.
And any guy on this show is a better match for Spencer than Toby. I'm sorry, but I cannot support their relationship after his stupid cop career took off. I just can't.

Lorenzo and Alison are a good match. They have my blessings. Sara and Emily? Neeeext.

We were given plenty of clues today that point towards Aria having a split personality. Looking into mirrors, taking pictures of dolls that resemble her, Clark saying she has a shadow across her face... come on, it all has to mean something!

The Maddy Ziegler opening dance sequence was... unnerving and unnecessary. I love her in the Sia music videos, but what was her dance supposed to convey? What significance could it have with respect to Spencer, who doesn't even dance?

Sara didn't need to seek legal emancipation. If she's around their age, she'd turn eighteen in a few months. I'm sure the process would take longer than that, anyway.

So Lesli is the new Noel Kahn/Ian Thomas/Melissa Hasting/Ezra Fitz/Andrew Campbell of red herrings. Wonderful.
Rosewood is a mental town. There are probably x+2 number of people walking around in black hoodies all day, with or without boobs.

I should just call this segment 'Most Feral This Week', because the only person likely to be 'A' at this point is Charles. And Wren is most likely Charles.
Anyway, Aria was vibing me the wrong way this episode. I'll give Sara a free pass because her name is mentioned every week. The poor girl needs a break.

Here's the promo for next week's episode - no, wait, there's no episode next week, for some reason. We'll have to wait until July 14th to find out more about the Lesli-Is-A situation.


To be honest, I'm relieved. I'll be back in Mumbai in a couple of days, and I'm very unsure about my WiFi situation. At least this way, I might be able to get a stable internet connection in time for the episode.

What did you think of this week's episode? Are you also tired of all the questions and the lies? Can we just find out who Charles is already?

PLL Geeks, I shall see you in two weeks' time. Goodbye!
Posted by Unknown at 09:53