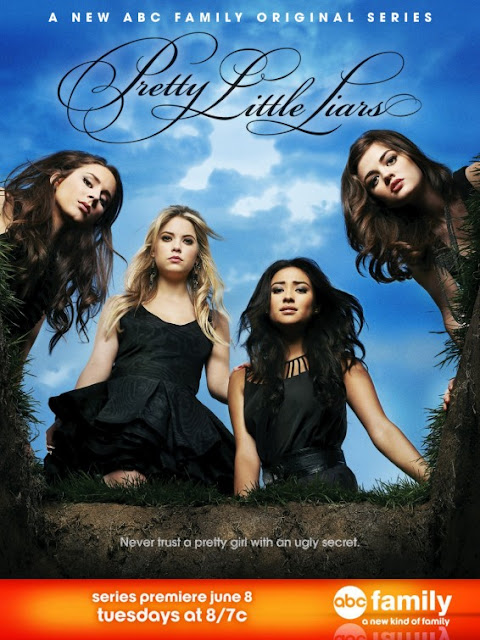 With all signs pointing to Lesli as the tormentor in the hoodie, the PLLs are on a mission to get concrete proof before bringing their findings to the police. But as the girls ramp up their investigation, 'A’s' threats escalate.
Meanwhile, a friend of Emily’s makes her a surprising offer, and Spencer is pressured by her family to make an important decision.

After a one-week hiatus, PLL is back with - you guessed it - yet another filler episode where nothing substantial happens. Sigh.

The episode starts with the Liars talking about how Lesli Stone is obviously 'A'. Who else could it be? She has ties to Radley, Mona, Bethany and Charles, as well as reason enough to hate the Liars. Since there aren't any other suspicious characters on the show at the moment, it has to be Lesli, right?

Mr. DiLaurentis receives a surprising birthday card in the mail, and as Emily drives by on her cycle, he demands her to tell him whether she saw anyone near his mailbox. Hmm.

Back home, all signs point to the fact that Samily is going to be a thing soon. Yes, lovesick Emily rubs cream on Sara's back tattoo and helps her grunge out for her first day working with Caleb.  But it doesn't turn out to be a very productive day. Caleb teaches her tech stuff, they talk about feeling like outsiders, and then he leaves to get lunch.

Dean stops by with some brownies for Spencer, and she confides in him that she's hesitant about delivering her valedictorian speech. It's too soon for her to be able to talk about what happened in the dollhouse, and that's all her student community will be expecting from her. Dean tells her she doesn't have to do it if she doesn't want to. They make plans to meet during the stoner's meeting, but when Spencer arrives late because of Project Bring Lesli Down, Dean freaks out because he thought something had happened to her. "I can't see you anymore," he says, not because of her impunctuality, but because he has feelings for her in spite of her having a boyfriend (oh, right, Toby still exists. Damn).
Unfortunately, he leaves without kissing her. Huh. That's a first on this show.

Aria is still on edge around Clark, because a) he asked her out and she rejected him, b) she stole (borrowed?) his negatives, and c) he's somehow always around. When she returns to the junkyard with Emily to investigate, she finds an Aria doll with a knife stuck in its eye. Creepy, creepy.
Although she and Ezra are broken up, he comes over to give her the glowing recommendation letter he wrote for her photography contest, and they have a moment that's a little awkward for Aria to deal with, especially when he notices the creepy doll that's sitting in her house.

Hanna and Caleb are still at odds. She believes he's smothering her, he believes she's shutting him out, and Mrs. Marin believes they'll work things out.
Maybe mother does know best. The couple makes up - or rather, makes out - in the midst of another fight. Yay for Haleb!

Emily's supervisor from Haiti comes to see her to offer her the chance to work on a project in Thailand. Emily is hesitant at first, but realises that this could be a wonderful opportunity for her and Sara to get over their trauma.
But Sara, who almost got run over by a car that looks eerily like Lesli's, is reluctant to do anything that goes against her mother's wishes. And of course Emily doesn't want to leave Sara alone for the entire summer.

Meanwhile, with the help of the dumb blonde stereotype, Hanna charms a valet into thinking that she's lost the ticket to her car. What they find inside Lesli's car only increases their suspicion: she keeps animal cages in the trunk and owns over ten pairs of identical non-prescription glasses.
There are metal detectors in the office where she works - along with cage after cage of creepy animals - and that's when the Liars discover that they've been chipped in the back of the neck! That's how 'A' always knows where they are. They're being tracked. That's a new low, even for 'A'.

That's when Mona steps inside and tells them that Lesli has no vendetta against them. All she wanted was to keep her stint in Radley a secret. Besides, Charles couldn't possibly be dead. He escaped with Bethany the night Alison disappeared.

This is all too much for Aria, and she knows in her heart that she needs to talk to Ezra about this. But she spots Ezra having a lovely time with Emily's Australian supervisor at The Brew, and that seems to change her mind.

But on PLL, when one relationship ends, another one begins. Emily is checking for chip signs on Sara's neck when she wakes up, rolls over, and plants one on Em's lips. Well, well, well. It finally happened.

As the episode comes to an end, we see Mr. D furiously digging up Charles' grave. The card lies open on the ground. Looks like Charles is coming home for his birthday.

What was the point of this episode, other than to state the obvious? Charles isn't dead. Lesli isn't 'A'. Sara and Emily are hooking up. Caleb is still the perfect boyfriend. Aria stares at her reflection some more. More boys are in love with Spencer. Gah! Give us some answers!

Alison was nowhere to be seen this week, and neither was Lorenzo. Damn. He was growing on me.

And since Lesli isn't 'A', how could it be possible for her car to have followed Sara around? Sara is clearly lying. Emily's heart will break once more. Sigh.

Most Likely to be Charles This Week

Still Wren. Especially since he has the surgical skills to implant them with tracking devices.

I'm hoping next week's episode will be a game-changer. Four more episodes to go, and we know nothing. Buck up, PLL. You're supposed to bring your 'A' game. Literally.


What did you think about this week's episode? Disappointed? Excited? Furious? Feel free to rant in the comment section.
I'll see you next week, PLL Geeks. Bye!
Posted by Unknown at 17:27