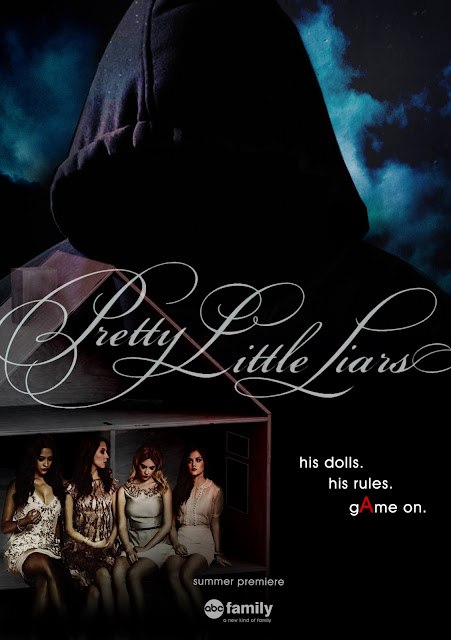 There are mixed emotions in the DiLaurentis household when Charles declares he is coming home for his birthday. Mr. DiLaurentis wants to quickly get out of town to hide Ali and Jason from their brother, while Jason sees this as an opportunity to finally validate all of the early childhood memories of "Charlie." The PLLs are just as split with Spencer and Hanna seeing this as the best chance to capture Charles, while Emily and Aria want to stay far away from him as possible. Will Jason be reunited with his brother, or is this just another one of "A"'s traps?
Meanwhile, Mona is shutting Mike out and Hanna gets an unwelcomed surprise.

Welcome back to another #PLLWednesday on the blog, Geeks!

Unlike the last few episodes, 6x07 was actually intense, action-packed and interesting to watch. We didn't get a lot of answers (as is the ritual), but at least it wasn't a total filler episode.

The Liars congregate at Mona's house so they can interrogate Lesli further... although the suspect in question refuses to meet them. Still, they need to tell Alison about their findings. Why won't she pick up her phone?

As it turns out, her father is taking her someplace safe, away from Rosewood, where Charles is planning to throw his homecoming birthday party. And that means Charles is alive and kicking - and ready to meet his family.

Charles has also sent an invitation to Jason, and in spite of his family's warnings, Jason is determined to reunite with his childhood best buddy. He wants answers, and he's going to get them.

Emily runs into Sara's BFF at the Brew, and this friend is very excited to get in touch with Sara again. Much to Em's dismay, Sara and Claire get along incredibly well, and when Claire offers her home to Sara for a few days, she doesn't refuse.
Sara's excuse, though, is that she and Emily might finally have a chance at a real relationship if she moves out, away from the watchful eyes of Pam Fields. That doesn't stop Emily from wistfully sniffing her lover's pillow after she leaves, though.

Mrs. Marin has a surprise for her daughter: she applied for a ton of scholarships, and one of them has checked out. The Carissimi Group, to whom Mrs. Marin applied on Jason's recommendation, is going to pay $30,000 towards Hanna's college fund!
Hanna and Spencer do a background check and realise that one of the organisations under this group's umbrella is Radley Sanitarium. No wonder Jason's mother donated so much to Carissimi.
That's when Spencer gets a call from Alison and steps outside. The stoner chef lady pops in and slips some pot candy into Spencer's bag.
During the phone call, Alison reveals the truth behind Charles' fake death and begs the Liars to stop Jason from meeting their tormentor before it's too late.

Meanwhile, Aria and Mike have a sweet sibling moment when they talk about Mike's relationship with Mona - or lack thereof. She hasn't responded to any of his calls since her return from the dollhouse, and he's afraid it means she doesn't love him anymore. Aria urges her brother to go talk to her, and he manages to convince his lady love to give their relationship another shot.

Now that the Liars know what's really going down tonight, it's time to nab the man who has made their life a living hell. After consulting a few medical videos, the girls un-chip themselves and track Jason's car on Caleb's burner phone. Toby, who now knows everything about 'A', volunteers for this mission. He's not willing to let Spencer into harm's way again.

Unfortunately, cops love sugary snacks and Toby's no exception. He grabs Spencer's candy bag as he leaves, unaware of the powers that it possesses.

Alison knocks her father out with some sleeping pills, calls 911 and heads to Rosewood with Mona's help.
The girls aren't willing to be left out. They grab their keys and race into the night.
Jason finds himself at an abandoned arcade shop with Charles, clad in his trademark hoodie, right in front of his eyes. The brothers are finally together once more... until Lorenzo and Toby jump into their midst, guns in tow. Charles manages to fend off Lorenzo, but Toby's got him cornered. And then the weed kicks in and Toby falls to the floor.

The Liars get there just as Charles escapes once again.

Thanks to Spencer's tight-lipped attitude (and drug addiction), the Spoby relationship might be sinking again. Hanna's mother is frustrated and wants her daughter to take the scholarship, irrespective of the circumstance, and get the hell out of Rosewood. Emily is lonely. And Aria? She gets a letter in the mail congratulating her. She's a finalist for the art scholarship.

Back at the DiLaurentis household, Jason and Alison discover another home movie left for them by Charles. It's the footage from a second cousin's birthday party they attended, a cousin named Freddy. A cousin who may have been Charlie all along...

Finally, Sara has moved out of the Fields household! YES!!!!
But now she and Emily might become more serious... should I be happy or sad? I still do not trust this feral woman.

Surprisingly, neither Caleb nor Ezra were in this episode. And here I thought they were important to the storyline. Caleb, at least. Nobody cares about Ezra anymore.

Seriously, though. We were THIS close. THIS close to seeing Charles' face, and then Toby has to ruin the night with his big cop act. And why did he have to eat the candy? This is why sugar at night is a bad idea, people. Also, hugs not drugs.

I don't think anyone was being suspicious at all. Except maybe Aria. She always looks like she's up to something. Never trust the one who looks the most innocent, Geeks.


What did you think of this week's episode? Any Charles theories in your head? Is Sara really the good girl she's pretending to be? Are you still a Spoby fan or do you daydream about Dean, too?
Let me know in the comments below. See you next Wednesday!

PS: Geekie Chic has been featured as one of the top 15 book blogs of India! Read all about it in this article here.
Posted by Unknown at 15:54