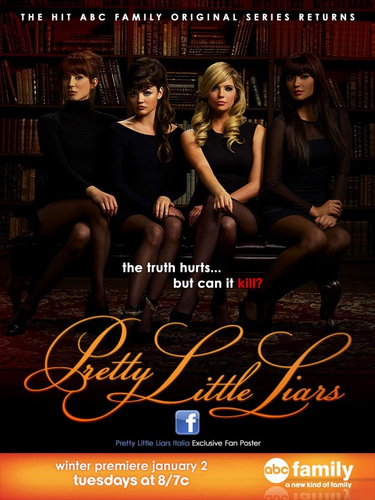 After their latest run-in with Charles, tensions are at an all-time high with the PLLs and the town of Rosewood. Aria’s big moment of seeing her work displayed in an art gallery is in jeopardy as Ella is determined to keep her safe at home. Hanna is still uncomfortable with the unexpected scholarship money and is determined to give it back, even if that means ruining her chances at going to her school of choice. And to top it off, the one normal high-school rite of passage the girls are looking forward to is in danger as Rosewood High is considering not letting the PLLs attend prom due to security issues.
Meanwhile, the more Alison learns about her brother the harder she finds it to connect a deranged murderer to the young blonde-haired boy she sees in the photos and in her memories.

By this time, two weeks later, we will have known for sure who Charles is. Squeeee!

I was expecting FrAmed to be a filler episode, but although we didn't get any answers, as is the trend, the episode didn't drag or tear my attention from the screen for even a second. Here's what happened today:

Now that the cops know about the existence of Charles DiLaurentis, everyone is on high alert as the town looks out for the blue-eyed blonde who has been the cause of so much chaos. With Hanna batting for his death, Alison worried about her brother's life, Mrs. Montgomery frustrated with the police's efforts and the school board wanting to exclude the girls from prom, there's a lot going on in the lives of the Liars.

Prom may be a distant dream just yet, but Emily knows that she wants Sara to be her date. The status of their relationship is currently ambiguous, but someone's got to step up to change it, right? On the other hand, Aria's wondering if maybe she should just go stag. Which guy would want to take her after all that's happened?

But first Aria has to think about being able to attend the gallery where her photos will be shown. Her mother is worried about her safety, but when Detective Tanner assures her that there will be ample security onsite, Mrs. Montgomery is suitably convinced.

Meanwhile, things are heating up between Lorenzo and Alison. He almost risked his life trying to find her brother, and Alison couldn't be more grateful. If only she could find out what's going on behind closed doors in the police station...
Maybe she can. Lorenzo falls asleep after having the soup she made him. Alison grabs his police ID card and walks out of the door, desperate to know more.

Hanna and Spencer are busy playing detective. Hanna needs to get to the bottom of her scholarship situation: was it really Charles who sent her the money? And by refunding the scholarship, will they be able to find him?
So the two girls head to Carissimi Group headquarters and come face-to-face with a man named Reese. In Hanna's words, "he has Alison's perfect chin and Jason's perfect hair." Sound like anybody we know?
Reese refuses to answer any questions about the mysterious Mr. Carissimi and says he has to protect his anonymity. Hmm.

At the gallery, Aria caves and asks Ezra to be her prom date. Before he can reply, his new friend Nicole walks in - the same Nicole who worked with Emily at Habitat for Humanity - and Aria finds the first excuse to get away: Clark. Clark has no friends or family attending the event, but he's excited all the same.
And then the shortlisted photos are unveiled. Aria steps ahead as the curtain falls. The doll pictures she took are nowhere to be seen. Instead, on the wall are framed photographs of their unconscious, naked selves in the Dollhouse.

Ella Montgomery is furious about what happened. How could the police let this happen after all their tall claims? Upset, she takes comfort in the Marin household and asks Ashley what in the world they can do to make their girls safer.

With Lorenzo's card, Alison breaks into the police evidence room, but finds nothing substantial other than a baby rattle that used to belong to her. Detective Tanner walks in and it's revealed that the rattle was found among other things in Charles' bunker. Tanner tells Ali that when this crazy murderer is found, he will be shot on sight with lethal force.
Lorenzo is wide awake by the time she returns to his apartment, and oh, is he angry. The police board will be looking into this spectacle and it could cost him his job. But he's angrier about the fact that Alison - in typical fashion - used him for her advantage. Trouble in paradise, it seems.

Ezra assures Aria that he and Nicole are only friends, and she confides in him that she's incredibly nostalgic about her days in Iceland, before any of this started, when she was just another girl sitting on the patio with her family in the freezing cold. And she doesn't know if she can ever feel that way again.

The latest Charles suspect - Reese - is spotted by the rest of the Liars just outside the gallery and they set out to chase him. He parks and exits the car in front of an abandoned factory. Minutes later, Clark goes inside the very same building, quite possibly because he's in cahoots with Reese.

As the episode comes to an end, it's revealed that Red Coat is indeed working with Charles, and they're definitely looking forward to prom.

No, Alison! Why, why would she jeopardize what she could have had with Lorenzo? He's such a sweetheart. And she didn't even find out anything useful. Common sense could have told her that a criminal like Charles can't be saved.

So Clark and/or Reese Witherspoon are now the prime suspects for 'A'? Open your eyes, Liars. It can't be some random dude. It's clearly Wren.

Fine, Clark was being really sketchy, but that doesn't mean he's 'A'. Maybe he's in love with Aria. Or he's spying on the Liars so he can write a book about Charles. Anything is possible in Rosewood.

I am so thrilled about next week's episode! Judging by the promo, it's going to be one hell of an hour. Looks like Alison will find out who her brother is... though I doubt we will.


What did you think about FrAmed? Wasn't it shocking when Aria's photos were unveiled? What are you most looking forward to next week? Let's speculate about Charles' reveal in the comments below.

Don't forget to follow me on Facebook and Instagram. I post daily updates about life, fashion, gratitude, food, fitness and much more.
Until next week, PLL Geeks... we're so close to getting all (or at least some) of the answers!!!