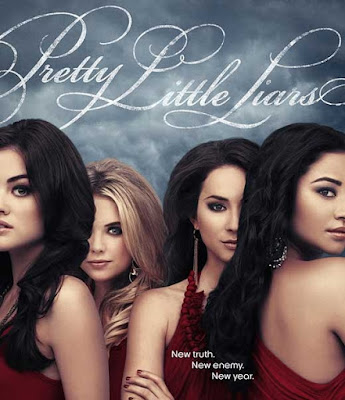 It is prom time at Rosewood High School, except for Alison, Aria, Emily, Hanna and Spencer who have been banned due to "security" concerns. As the girls see this as the final humiliating blow to their high school careers, the girls' mothers try to make the best of a bad situation by offering a home prom in Spencer's barn. At first reluctant, the PLLs agree and try to make the best out of a bad situation. But one to never miss a formal, Charles has other plans in store to make this a night they will never forget.
Meanwhile, Veronica, Pam, Ashley and Ella use prom night to touch base on everything that has happened to their daughters.

Oh. My. God.
We are so close, PLL Geeks. Just one more week until the identity of Charles is revealed. Today's episode was adrenaline-inducing, action-packed, and gave us a few answers (and more questions than we can count).

So the school board has made a decision: the Liars will not be allowed to attend their senior prom or their commencement due to security issues. Looks like their poofy dresses and dates will be holed up inside Spencer's barn, and their diplomas in their mailboxes. Tsk, tsk. But the moms think that even a silly little get-together in Melissa's ex-house is better than no prom.

Speaking of photographs, guess who won the competition and bagged the fancy L.A. internship? Aria! But she doesn't have too many reasons to celebrate. Clark has gone MIA since his stint with Rhys (Reese?) at the abandoned doll factory, and isn't this proof enough that he's up to no good? Why else would he avoid Aria's calls and texts?

Toby's been suspended from the force for being stoned on duty. Not his fault, as Spencer argues, and she's willing to go to Detective Tanner with the truth. But what's done is done, and Toby doesn't want her meddling anymore. Lorenzo agrees - he's realised that Alison was, and still is, a manipulating mastermind, and it's best if he avoids her from now on. Spencer disagrees. Ali might have been the Queen Bitch once, but she's had her moment of redemption now. All she needs is someone who understands how vulnerable she is, deep down. And Lorenzo might just be that 'someone'.

Toby and Ezra are willing to accompany their leading ladies to prom, but what excuse do Caleb and Sara have to cancel? Caleb's visiting his dad in New York to deliver an industrial-strength laptop, and Sara has already made proms plans with her besties back home.

Hanna won't buy it, though. She investigates a little and finds out that Caleb's dad isn't expecting his son in the city at all. Then why would he lie? Is he trying to get to the bottom of this 'A' mess?

The night of the prom, the Liars' mothers are having their own little party. Booze included, of course. One thing leads to another and we get to feast our eyes on the Drunk Moms (a spinoff we would all love, thank you very much), with Veronica Hastings leading the women to the DiLaurentis house so she can pick a fight with Kenneth.

There, they run into Rhys from the Carissimi group, and like their daughters, the moms wonder if he's Charles. Their inebriation (and Veronica's obsession with Kenneth) causes them to get locked in the basement, without their phones or their senses. Great going.

Meanwhile, Alison - who received a mysterious text from Charles asking her to prom - sneaks into the school's official dance. Clark is there, too, with his camera. His eyes linger on Alison for a little longer than usual.
The Liars are done posing for their phones and are now spying on the prom they missed. Jenna and Lucas holding hands? Noel's drunk new girlfriend? And wait - is that Alison photobombing a random couple?

So the Liars and the boys break into the school to attend prom as well. Though they find Alison, she insists that she needs to meet her brother, face-to-face. He wouldn't hurt her. The Liars do their best to keep their eyes on her, but with Caleb and Sara gatecrashing (Caleb wanted to surprise Hanna with some great news - he got a super-secret job in NYC so he could pay for her tuition), and a major bomb dropped by Ezra (he's going to Thailand with Habitat for Humanity this summer), it's safe to say that everyone gets distracted.

Not for long. Alison runs behind Red Cape (Red Coat?), Clark following suit, and that's when it's revealed that Clark isn't your average college student. He's an undercover cop.
But although Clark, Toby, Lorenzo and probably the entire police force is in the building, Charles manages to lure Alison into a secluded spot. And that's when he takes off his mark.

Just turn the damn camera and show us his face, damn it! Why would Ali be so surprised? Because she finally sees him, or because she knows him? Alison's never met Wren, has she?
At least this rules out Caleb, Ezra, Toby, Lorenzo, Clark and Sara. And all the moms.

Can we give the moms a standing ovation, though? I loved their scenes. From drama to humour to drunk speculation, we need more Drunk Moms on this show.

Also, how exactly did the Liars get out of the barn if the police cars were patrolling the area? And how did they gatecrash prom if their names weren't on the guest list? And why didn't the chaperones just kick them out?

I don't even care. Can August 12th get here already?

Next week's promo isn't really a promo, probably because they can't disclose too much. They have released the first two minutes of the episode, which you can watch here, but other than telling us that the Liars know Charles' identity and story (and that his motive is very 'understandable'), we find out nothing.


This reveal better be epic, Geeks. I'm going to be really disappointed if it isn't Wren at this point. And what is the deal with Rhys? And what happens to the Drunk Moms? Do I really have to wait so long to find out?

I'll be counting down the days until next Wednesday. What about you? Tell me your theories in the comments below. What are your thoughts?