'Ruby's Misadventures with Reality' by Samantha Bohrman: A Book Review 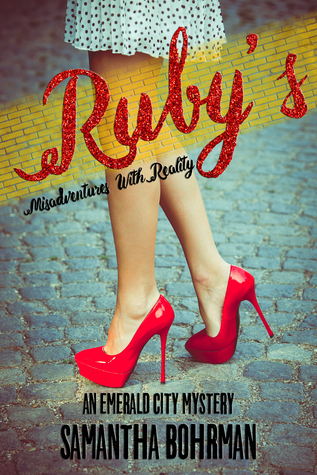 She's off to see the killer...
Lawyer Ruby O'Deare might not be living the American dream, but it feels like it every time she visits her small town megamall. The shoes! The lighting! Prince Charming spotted in the food court! It's a dream, right?
But all dreams must come to an end.
Ruby's does when she wakes up after a one-night stand with the town's sexy zoning commissioner, Noel West. Actually, that part is good. It's the expired Dollar Store condoms she finds that feel too real.
And then her favorite client Estelle turns up dead.
Ruby is determined to find out the truth behind the curtains of Ozcorp, the company that owns the heavenly megamall and has the most to gain from her client's death. She just hopes the zoning commissioner she might be falling for isn't caught up in the danger.

Note: I received an advance ready copy from the publishers (Entangled: Select Suspense) via Netgalley in exchange for an honest review.

I've been on a chick-lit-murder-mystery reading spree off late, haven't I?
At least that's what I thought until I finished reading this book. Ruby's Misadventures with Reality is somehow both and neither genre at the same time. I didn't know that was even possible.

See, the plot blurb sounds very interesting. A young woman dealing with a pregnancy out of wedlock while she solves the murder of an ex-client, plus a shady corporation that runs the entire town in the background?

Buuuuuut... that's not what the story is about. Heck, I just finished reading it and I still don't know what the plot actually is. Yes, you have a murder, but it's conveniently ignored up until the end; there is an unexpected pregnancy, but no inner turmoil or conflict; and the history of the shady corporation is barely mentioned.
Most of this book is about Ruby's impulsive shopaholic tendencies, her unexplained romance with Noel West and her relationship with her roommate/best friend who cares absolutely nothing for her. Oh, and the stoner who sleeps on her couch.

Anyway, the story is very, very slow-paced. Even though it was such a long, long read (or did it just feel that way?) nothing was happening other than the silly problems Ruby would get herself into every single chapter.

The writing was typical chick lit. Nothing special, but nothing bland, either.

Every time she sat down with a caramel roll and Estelle doddered around looking for unnecessary butter patties, she felt unconditional love wash over her. Maybe it was just the butter, though. Butter might feel a lot like love.

The characters in this book were not at all likeable. The protagonist herself was so immature and annoying that reading from her perspective was exhausting.

Ruby's roommate is negative about everything, shows no kindness towards her best friend, and allows some random stranger to sleep in their house, free of cost. Why?

Their landlord, Noel West, has a one-night stand with Ruby and suddenly falls in love with her. He's your characteristic 'perfect man' who makes a serious error in judgement but renounces his ways in the end. Why does he like Ruby? When has he ever had an actual conversation with her that didn't involve the Ozcorp scam?

The pregnancy storyline felt pointless. It could have been a wonderful opportunity to show Ruby struggling with her career, her feelings for Noel, maybe even her thoughts on abortion, but the author let it slide for some reason.

The only bits of this book that I liked were the Wizard of Oz references, the way Ruby and Noel's feelings are described (although the reasons aren't specified) and the occasional funny line here and there, usually courtesy of the stoner.

I'm going to go with 2 stars out of 5 for this one.
Ruby's Misadventures with Reality feels like a half-hearted, confused attempt at writing murder mysteries for chick lit readers. It isn't something I'd recommend, unfortunately.

This book released on July 14th, 2015. Have you picked up a copy already, or are you planning to? And are there any books you'd like me to review? Feel free to contact me.
Also, don't forget to follow me on Facebook and Instagram for everything geekie.