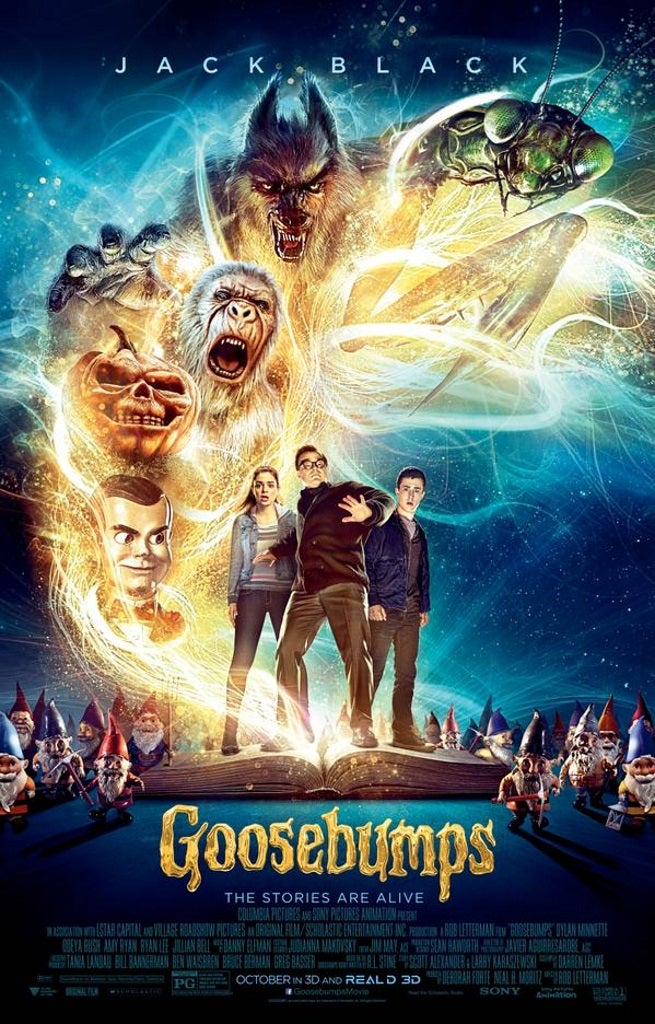 Upset about moving from the big city to a small town, young Zach Cooper (Dylan Minnette) finds a silver lining when he meets his beautiful neighbor Hannah (Odeya Rush). The teen is surprised to learn that Hannah's mysterious father is R.L. Stine (Jack Black), the famous author of the best-selling "Goosebumps" series. When Zach accidentally unleashes the monsters from the fantastic tales, it's up to Stine, his daughter and Cooper to return the beasts back to the books where they belong.

I remember going to the bookstore as a child and coming back home with stories of monsters and men, werewolves and ghouls, vampires and dwarves, all out to ruin the lives of teenagers. So relatable, right? It's safe to say I was obsessed with the works of R.L. Stine and the many ways in which he could turn non-threatening things like parents, shopping malls and ventriloquist's dummies into my worst nightmares.

And now, years after I've put down his books, comes the movie version of my childhood. No way in hell was I going to skip this one.
So the question is... did it live up to ten-year-old Swati's expectations? Did it remind me of bedtime stories and the thrill of reading horror? Did it give me - pardon the pun - goosebumps?

I went into the theatre expecting nothing more than a good comedy. I'm nineteen years old, for heaven's sake. Slappy can't scare me anymore. All I was looking forward to was a walk down memory lane, some great one-liners by Jack Black and great 3D effects.

I'll be honest here: Goosebumps isn't the kind of movie most people would like. Jack Black notwithstanding, there aren't any prominent actors, the music is forgettable at best, and the love story is clichéd and boring in spite of a genius nod to one of my favourite Goosebumps novels.

From the werewolf with surprisingly well-defined abs to the abominable snowman to those creepy little dwarves, this movie made me remember every single Goosebumps book I'd ever read and loved.
Making Slappy the main bad guy was a stroke of genius. After all, he probably is the series' unofficial mascot, what with all the trouble he's caused. Plus, he creeped the shit out of me. It's Slappy, after all!

The plot has more holes than a moth-eaten Santa costume, and yes, the humour is mostly slapstick and won't make you go LOL, but Jack Black's delivery is superb, as is Ryan Lee's portrayal of the nerdy sidekick, Champ.

The ending made it seem like there might be more Goosebumps movies to follow in the years to come... and if so, I'd definitely be down for that. With better special effects and acting and a more engaging script, this could be a franchise for more than just the book readers.

I'm going to go with 3.5 stars out of 5 for this one.
If the book series holds a special place in your heart, just like it does in mine, then head to the movie theatre now! But if the words 'Goosebumps', 'R.L. Stine' or 'Fear Street' mean nothing to you, then give this one a miss.

Still can't make up your mind? Take a look at the trailer.


What did you think of this movie adaptation? Which Goosebumps books were your favourite? I loved the Fear Street and Give Yourself Goosebumps series.
See you next time, Geeks! :)
Posted by Unknown at 12:13