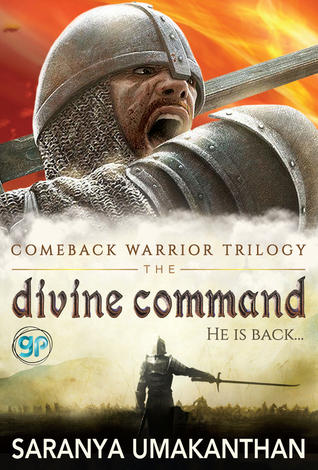 The divine command was from Lord Shiva. So Shaktipurians would do anything to safeguard the 'Taal-Patras' -- the ultimate secrets compiled onto palm-leaves by the yogis that contained everything! Yes, all the do's and don'ts from making of the elixir to reviving the dead!
This task was headed by their beloved warrior Indrajith. But destiny brutally destroyed their plans! Their toughest braveheart was to perish in a bloody dual. This ill-fated episode prompted the rise of the nefarious king of Narakdesh -- Asurshasak!
Desperate, Shaktipurians recited the revival slokas on the dead grave of their only hope…
Would Indrajith emerge and come back stronger than before? And if he comes back, who is waiting for him now with a pole arm in her hands and protruding teeth?
With black-magic obstacles barring his way, the comeback warrior -- Suraj Sena is shaken when the conspirator rips off the mask! But traitors never go unpunished!

Note: I received a copy of this book from the author in exchange for an honest review. Thanks, Saranya!

I don't know what to say about The Divine Command.
On one hand, I think it'd make a great children's book: the plot is interesting, the writing is simple, and the romance is PG at best.
On the other hand, this novel isn't targeted towards children, especially when you consider the amount of violence and gore in the story.

This is one of those contemporary mythological stories. Suraj is your average college student, who has his fair share of fun and games with his two pals, Varun and Diya. Things are tense at home because his mother Ritupara treats him with no dignity, but that's nothing compared to the death threats he's been receiving from toothy demons and rakshasas from Narakdesh.

The first chapter was written from Indrajith and Princess Deepali's perspective, and it seemed like a different book altogether. The writing style was impressive, fancy, mystical, too... but once the reader shifted to Suraj and Diya's points of view, the book regressed into a children's fantasy novel.

And the romance - or lack thereof - was upsetting. Diya and Suraj have a wonderful friendship that could have blossomed into love, but apart from the blushing and feeling shy and holding hands on every page, nothing happened. It felt so childish. These kids are in college, for heaven's sake!

The one big plot twist at the end of the book? I called it as soon as we met a certain character early on in the story. It wasn't surprising at all. A four-year-old might have been able to predict the villain's true identity.

The writing style and characterisation failed to impress, as did the grammar, because I could spot typos and grammatical errors on almost every page, but at least the story was interesting. Suraj faces so many dilemmas, from girl trouble to war trouble to overcoming life-risking tasks to prove his worth as the comeback warrior, and I loved reading about his adventures. It appealed to my inner child... but the almost-twenty-year-old-me just couldn't look past the many flaws of this book.

I'm going to go with 2 stars out of 5 for this one.
The Divine Command has a promising storyline and an engaging saga of friendship, but that's all it has to offer. I wouldn't recommend this book for anyone over the age of twelve, and I probably won't be picking up the other books in this trilogy.

Do you enjoy historical/mythological fiction, Geeks? Are you going to give this book a chance? Let me know in the comments below. I'll be back with a book review next week. Until then, here's sending some positive vibes your way. Bye!
Posted by Unknown at 12:51