'My Dream Man' by Aditi Bose: A Book Review 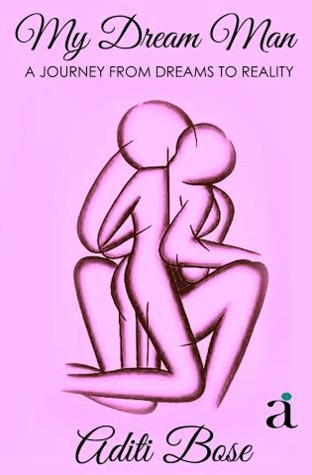 Ajopa Ganguly is a girl in her twenties who lives with her parents in Delhi. Her life is fine except for one tiny problem. All publishers have rejected the manuscript that she has very painstakingly written. She believes it's more because she is not a known celebrity rather than because the plot is not appealing enough. She is so disturbed by this that she has been baking cupcakes and embroidering handkerchiefs instead these days. This is when Aniket Verma re-enters her life. He is a professor of economics who is well known in his circle. He's twelve years older to Ajopa. They had been good friends till a misunderstanding happened five years back.
What happens when they meet again is what the story is all about.

Note: I received a copy of this book from b00k r3vi3w Tours in exchange for an honest review.
Writers tend to be a romantic lot, as far as I know - and I know quite well, being a writer myself. The same is true for Ajopa Ganguly, the protagonist of this novel. I was expecting quite a bit of romance in this novel, especially since the cover turned out to be a little racier that I'd initially thought, but I was surprised.

My Dream Man isn't your typical love story. It reads like an autobiography or a personal account more than a romance. Ajopa talks very informally, directly to the reader, and without any hesitation or personal reservations. And that's good, because I really enjoy rambling, random musings in a novel.

However, Ajopa's 'dream man', Aniket, isn't very well explained in the novel. The writer followed the 'tell' approach instead of the 'show' approach. We're told again and again how incredible a man Aniket is, but we're hardly ever shown what he's like. He's twelve years older than Ajopa, sort of her tuition teacher, but later becomes her close friend and confidant. And, of course, they fall in love, but it does seem to be more of an insta-love relationship instead of a deep, meaningful one, in spite of them having known each other for almost ten years. I don't know how that was possible.

There were also a lot of grammatical errors in the book. I don't want to generalise, but it feels like most Indian fiction is badly edited and proofread, and that really makes me feel ashamed of our publishing industry. Can't they tell an 'its' from an 'it's' or know the correct placement of a comma?

But on the bright side, I did have a soft spot for the funny narrative and the slightly immature but interesting personality of the protagonist. The ending, though clichéd, had a surprising element to it that I really enjoyed. I also liked that Ajopa's career subplot wasn't far-fetched or exaggerated in the end, but continued to be realistic and relatable.

I'm going to go with 3.5 stars out of 5 for this one.
Poorly edited and immature though it may be, My Dream Man is a fun one-day read for when you're in the mood for something light-hearted and relaxing.

Geeks, how do you define your 'dream man' or 'dream woman', if you have someone of the sort in mind? For me, it'd be someone really intense, philosophical, intelligent and kind-hearted. Oh, and bonus points if he's a superhero vigilante.

I'll see you soon with another review. Bye!
Posted by Unknown at 15:58