'When the Time Comes to Light a Fire (Gem City #3)' by Nicole Campbell: A Book Review 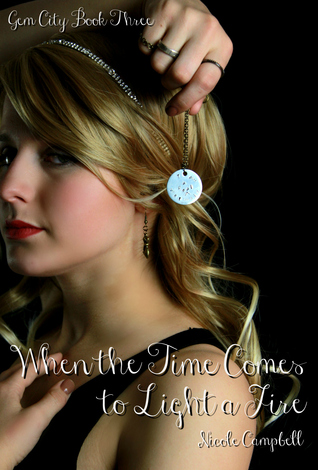 There comes a time in every girl’s life when she is forced to pose a troubling question:
What have I done?
Sixteen-year old Vanessa Roberts is quickly learning how to deal with her annoying pretty-boy lab partner, her incredibly ADD best friend, and the seemingly widening gap between her and her mother. Zack Roads should have been everything she deserved. He is more than just a nice distraction; he is also the cause for every envious glance shot Vanessa’s way as she enters her sophomore year at Gem City High. What happens when she finds herself amidst a storm of hope, regret, and the danger of losing herself along the way?

Note: I received an advance copy of this book from the author in exchange for an honest review. Thanks so much, Nicole!

After reading and loving the first two books in the Gem City series, I had high expectations from this book, especially since it involved cool-girl Vanessa and fun Luke.
And I am very happy to say that When The Time Comes to Light a Fire (wow, that sure is a mouthful) did not disappoint.

Vanessa is such an interesting character to read about: spunky, confident and bright, and yet with a certain naivety that gets her into trouble on more than one occasion. I really enjoyed finding out the dynamics of her relationship with Luke before they even had a relationship.

She held her head slightly higher than normal, putting one foot in front of the other with certainty. She greeted her parents, she took the stairs calmly one at a time, and she closed the door to her room. Then she came apart at the seams.

I didn't like Luke's character as much as I had in the previous books, because he comes off as vain and arrogant (a lot like Ethan from books one and two), so he won't be joining my list of book boyfriends any time soon. Still, he seems to be perfect for V.

As for Zack, the jerk Vanessa dates for more than half of the book, I hated him with all my heart and was rewarded with so many badass scenes giving him what he deserved. God, he is such an annoying character. Never trust the incredibly pretty popular boys, Geeks. Never trust them. And if you're reading this and you're an incredibly pretty popular boy, make sure you don't pull a Zack Roads.

The book is plenty funny with tons of laugh-out-loud moments, especially involving Vanessa and Luke's witty banter during Biology class. The book handles teenage relationships and romance very realistically, while at the same time having its own oomph factor when it comes to love.

But she loved him. Not in the way a damsel loved her knight, though he was that for her on more than one ocasion, but in the way that a fire loved oxygen. Even when she was sure it had gone out, he fed the spark that was left until she felt like herself again.

He knew he was dangerously playing with fire, but there was no turning back now. He returned her kiss with everything he had, just hoping not to get burned.

I read an uncorrected ebook, so I can't say anything about grammar or spelling at this point. However, it is sometimes annoying to hear characters say 'like' so much. I was a teenager once (okay, I still am, but I'm turning 20 in nine days), and my friends and I never 'like' talked.

The epilogue was very long but very satisfying, too, with a big fat happy ending that I was looking forward to. Not just that, the book also has a few chapters from Luke's perspective that I very much enjoyed. Too bad he isn't getting his own book, eh?

I'm going to go with 4 stars out of 5 for this one.
When the Time Comes to Light a Fire is pure pleasure combined with tons of teenage angst and sweet, romantic confessions. If you like YA romances, this one is definitely for you.

Have you read all three Gem City books, Geeks, or are you planning to? Which one is your favourite? I think I liked What Comes of Eating Donuts With a Boy Who Plays Guitar (wow, another mouthful) the best, followed by this one.