'All the Glory' by Elle Casey: A Book Review 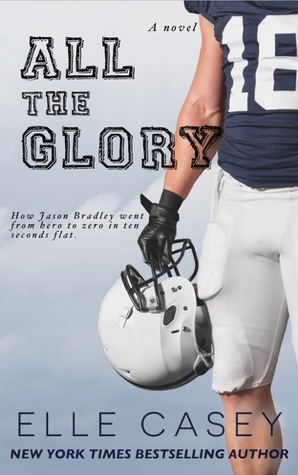 Jason Bradley has everything going for him. He's Banner High's first-string varsity wide receiver, headed to another State championship, and the college recruiters are already knocking on his door. His girlfriend is every guy's dream, there's a brand new black Camaro with a 6.2L, V-6 engine parked in his garage, and he's on cruise control.

But when the school's beloved football coach turns up dead and Jason's found standing over the body, his cruise control cuts off bringing his charmed life to a screeching halt, and the reality of being an accused murderer of the first degree takes over.

When everyone else walks away and leaves him to hang, one girl can't. But it's going to take more than guessing and wishing to get through to him and the truth of what happened, since he seems bound and determined to accept his fate as a criminal, tried as an adult and eligible for lethal injection.

Can one really determined girl get to the bottom of the mystery when no one else seems to care? It would be so much easier to watch him go down, and for many, maybe just a little bit too satisfying. After all, who isn't guilty of finding pleasure in seeing that perfect someone suddenly exposed for the self-centered prick that he really is?


I'm baaaaaaaaaaack! I decided it's been too long since I made a blog post. Or read a non-editing/beta reading manuscript, er, I mean, book. So here I am, all set to bore you guys with yet another book review.

This is probably the first non-work book I've read in months. Months! And you know what? I'm so glad I started with this book. It's restored my faith in YA novels. Siiiiigh.
As you know from the plot blurb, Jason Bradley is accused of killing his high school coach, and no one except his neighbour - Katy - wants to get to the bottom of the truth, not even the cops. He's shunned as an outcast, and the only friend he's got is the "Constant Gardener", Katy.

I was afraid this book would be your average insta-love, bad-boy-falls-for-good-girl kind of book, but... I was pleasantly surprised. Yes, there is romance, and yes, Katy's a good girl, but she's also smart, funny, sarcastic and brave. She's not your classic doe-eyed innocent beauty.
And Jason is a fantastic male lead. He's popular, yes, but a good guy in and out. He's admitted to his crime and is willing to do the time, and he can't for the life of him understand why a girl like Katy would ever trust a murderer like him. Except he's not just a murderer. He's a hero.

"The irony is, I had to murder a guy to become a better person."

The writing was hilarious, with tons of sarcasm and tongue-in-cheek humour. I was laughing or 'aww'-ing for most of the book. The romance is sweet and simple but not mushy or cringe-worthy. Bobby and Katy's friendship is written very well, although his clichéd 'gay guy loves makeup and dressing up' persona kind of pissed me off.

"Why would you do that?" The loyalty argument was rising to my lips as he (Bobby) answered.
"Because I love you. And when you see someone you care about making bad decisions, when they need you, you intervene, even when it means you can get hurt in the process and they might even hate you for it."

In short, All the Glory is absolutely glorious. Funny, lovable, unputdownable, intriguing and downright adorable, this is one YA mystery/romance you don't want to miss out on.

Geeks, if you have any recommendations for me, list them down in the comments below. I'd love to add more and more books to my TBR pile on Goodreads.

Oh, I'm currently reading Open Minds, book one in the Mindjack Trilogy, by Susan Kaye Quinn. I shall let you guys know how it is in my next review. Bye for now!
Posted by Unknown at 16:05