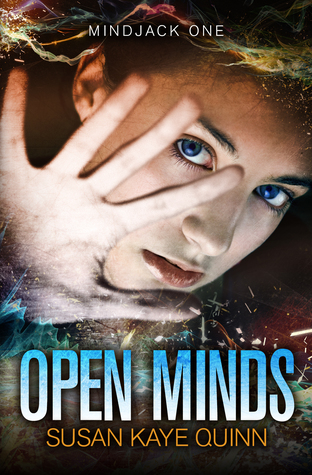 When everyone reads minds, a secret is a dangerous thing to keep.

Sixteen-year-old Kira Moore is a zero, someone who can’t read thoughts or be read by others. Zeros are outcasts who can’t be trusted, leaving her no chance with Raf, a regular mindreader and the best friend she secretly loves. When she accidentally controls Raf’s mind and nearly kills him, Kira tries to hide her frightening new ability from her family and an increasingly suspicious Raf. But lies tangle around her, and she’s dragged deep into a hidden world of mindjackers, where having to mind control everyone she loves is just the beginning of the deadly choices before her.

Ask anyone and they'll tell you dystopian fiction is one of my favourite genres (after romance, obviously). So it should come as no surprise to anyone that when BookBub told me Open Minds was free on Amazon for a limited period of time, I rushed over to the Kindle store to download it, stat.

Let me be honest: Open Minds did not have an engaging start. It's your classic humdrum high school scene with the outcast protagonist with the good-looking best friend of the opposite sex (*cough* Katniss and Gale *cough*), and the mysterious dark-haired boy who eventually catches her eye.

It's only a matter of time before said mysterious boy turns out to be just like her - not to mention undeniably attractive. Well, haven't we seen that before (*cough* Divergent *cough*).

But the book really drew me in around the 50% mark. Seriously. Shit hits the ceiling at that point, and the book goes from just blah (0%) to decent enough (25%) to... incredibly gripping.

The writing, I'll be honest, isn't all that special. It's your typical YA lit. Occasional clutter in the writing, but nothing too distracting. And yes, there is a love triangle (*cough* every YA book ever *cough*), but it's handled more or less pretty well.

“Seamus once told me that when readers touched, they shared feelings as if they were joined into one person. He said it was a very intimate experience. I would never be like the normal readers of the world. But, for the first time, I knew exactly what he meant.”

What I liked about the book was the premise, as unrealistic as it may seem. Mindreading has always intrigued me, and a world without lies - a world where your soul is laid bare to the world - is very interesting, isn't it? But what's even cooler is mindjacking. I love that term, by the way, although my best friend thinks it's weird at best. To be able to link into someone's thoughts, to control them, to fool them... it brings up such an ethical dilemma! All throughout the book I was struggling to decide whether I envied Kira and Simon (mysterious boy) or detested them for using their powers.

However, the book could have talked about the ethics and morality of mindjacking and mindreading, but it didn't take up the opportunity, which kind of really disappointed me.

I also really liked Raf's character (good-looking best friend). Of course, in this love triangle, I'm Team Raf, even though we don't see much of him in the novel. Which is unfortunate - but that may change in the rest of the series... let's see.

The ending: man, oh, man. The way the book ends is just perfect. It almost feels like the perfect resolution, but not quite, because you know it's still a cliffhanger. I think the ending really built up enough interest in me to buy the sequel (and the final book, and the short story collection) right after I finished reading Open Minds.

I'm going to go with 3.5 stars out of 5 for this one.
Thrilling and engaging, albeit quite clichéd, Open Minds is a good read for all lovers of YA dystopia.

I'm currently 45% into book two, and enjoying it quite a bit, so stay tuned for that review.

I'm also reading Confessions of a Reformed Tom Cat at the moment, but I'm not sure if I'm going to be reviewing it. Will let you guys know.

Anyway, happy reading! I'll see you around.
Posted by Unknown at 15:11