'Jack Be Quick' by Benjamin Thomas: A Book Review 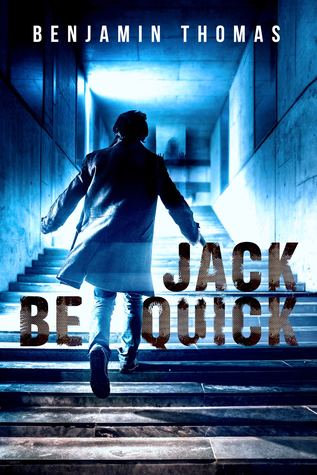 A picture scrawled in blood pushes paramedic Noah McKeen into a game of hide and seek with someone attempting to honor Jack the Ripper.

Tormented and controlled by little white pills and visions of the woman he had intended to start a family with now in the company of another man, Noah fights to control his sordid selfish behavior and stop a brutal reenactment of history’s most notorious serial killer.

Note: I received an ARC of this novel in exchange for an honest review.


I don’t know what it is about murder mysteries that thrills me so much. I’ve always loved them. From watching CID to binge-reading Hercule Poirot to playing James Patterson’s Women’s Murder Club games on my laptop, I’ve done it all, and loved every minute of it.

So it should come to you as no surprise that I really wanted to get my hands on Jack Be Quick. Jack the Ripper is one of history’s most fascinating serial killers, and I really hoped this novel would do justice to his horrendous work.

I’ll admit, the first half of the book wasn’t particularly engaging, seeing as the story was more character-centric than plot-centric. There was also a lot of focus on Noah’s drug addiction, which, while important to the story, did seem to take away from the mystery at hand.

Next to death, caffeine and narcotics were candy and soda. Maybe his real addiction was tragedy.


I did like his relationship, or lack thereof, with his ex-girlfriend Amber. I loved how, despite whatever went down between them, they still truly cared about each other, although their ways of showing it were a little twisted.

Detective Alyssa Madsen was another great character: a total badass, just the way I like my detectives. Her banter with Noah was interesting to say the least, and one of my favourite scenes involves them striking a friendship over a few drinks.

“Maybe sanctuary isn’t a place. Maybe it’s the people you surround yourself with.”


The mystery itself was good. I loved the fact that there was a lot of involvement with respect to ‘Jack’ (no spoilers), although I was a little disappointed with the reveal. I suppose I expected something more dramatic. I also felt that his backstory could have been explored a little more. That would have given the plot a really nice touch, and given the reader a chance to perhaps – just perhaps – connect with him.

I liked the writing. It was fast-paced, engaging and well done. I highlighted a couple of quotes (mentioned above) and would have shared more with you, but – well – spoilers!

The ending sort of intrigued me. It paved the way for a sequel, quite possibly, but there’s no cliffhanger as such. There’s enough resolution for it to work on its own.

A good homage to Jack the Ripper, Jack Be Quick is a thrilling read, although not quite as addicting as Noah’s little white pills.

Jack Be Quick came out in stores and on Amazon on May 9th. Pick up a copy if you think it’s your type of read!

PS: Benjamin, or the editors over at Owl Hollow Press, if you’re reading this, do drop me a comment down below and tell me why there’s no comma in the title. Honestly, I’m really curious. (LOL)