'Touched by Death' by T.L. Martin: A Book Review 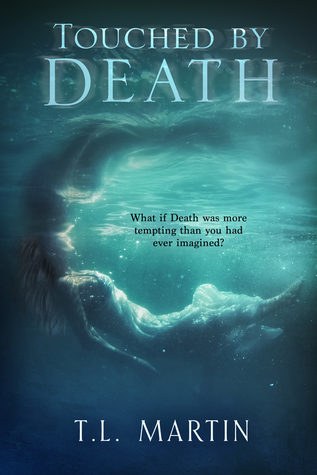 What if Death was more tempting than you had ever imagined?
With Grams's recent passing and a boyfriend who cares more about his next drink than her, Lou Adaire only wants to run. To start over somewhere new — maybe in a town where her family has history.
But when a storm sends Lou’s truck plunging into Tuttle Creek Lake, she discovers exactly what it’s like to fight for your life. To gasp for air only to have your lungs fill with icy water. To die.
What comes next changes everything.
Dark eyes. Consuming presence.
Death. As vague as a dream yet as intense as the lightning flashing above her still heart.
Everything about him calls out to her, tugging at her with the warm vibration of his pull. He’s supposed to take her; they both know it. She wants him to.
When she wakes in the hospital in a new town, she can’t forget what she saw. That impossible sensation of him breathing life back into her, a strong beat playing in her chest and a flutter running down her spine.
Trying to move on with her life in a foreign place is hard enough, but when he comes back for more — his burning touch against her skin, his consuming presence weaving in and out of her life, and his own scars running far deeper than hers — Lou begins to realize there’s more to Death, and to the sleepy Kansas town, than she ever expected to find.
Lou lived. But what if she’s not the only one in need of saving?

Note: I was asked to beta read and review this book by the author after a copy was provided to me. All opinions and thoughts are honest and entirely my own.

Touched by Death touches upon a very strange and unprecedented concept: a love story involving the physical manifestation of... Death. What does Death look like, you ask? Well, he looks exactly like my next book boyfriend. Which is to say, utterly irresistible. And that's the whole premise of the story, actually: the pull of death, the push of life, and the fight between head and heart.

What I liked about this story was that I went into it with no idea what 'Death' would be like, or how there could even be a romance involving Death. Needless to say, what I read was unexpected. Surprising. Intriguing.

Let's talk about the writing. Martin writes fantastically well, which I knew already from the first book of hers that I'd beta read, but I can say for sure that she's improved with time. There were so many quotes I ended up highlighting, so many quotes that made me sit back and think, and so many instances where a mere line or word would make tears come to my eyes.

Now I wonder if maybe allowing another person to give you strength takes a certain kind of strength in itself. To be able to lean all your weight on someone else with confidence in the knowledge they won’t drop you. How often does a person really find that kind of trust in another?

Lou and Death's romance is electrifying. A matter of life and death - literally. No spoilers, but I actually cheered when they finally got together after a considerable amount of time in the book. It was what I'd been waiting for ever since his introduction. And it did not disappoint, not even a teeny bit.

Because how do you make something whole again, when you’re missing half of the pieces?

This book isn't all romance. There's another major plot point, which I won't reveal, that pulls you in from the very start and makes you wonder how it all ties up together. And when it does, oh, boy.

The first 25% was a little slow, though, and I didn't quite understand why Death was in the corporeal world with Lou, so that kind of jarred me and took me out of the story. But apart from that, I was sold. Completely and utterly sold.

Martin is writing another book as we speak, and I wish there were a time machine so I could go forward in time and get my hands on it for me to beta read (or review). She's definitely one of my favourite clients and romance authors.

To conclude, Touched by Death is a book that will make you experience emotions you didn't even know you had: you'll laugh, cry, shout, scream, cry some more and close the book with a satisfying thud and a wide smile on your face. It's the kind of romance, the kind of story that will keep you up late at night, thinking. Just... thinking.

“You know, we all have a light inside of us. And the only person who gets to decide whether your light shines or not is you.”

Geeks, if it sounds like something you'd like to read, grab a copy on Amazon here! Make sure to leave a review and comment down below to let me know how you liked it.

If you're an author and you'd like me to review, beta read or edit your novel, get in touch!